King James Version (KJV)
And in every several city he put shields and spears, and made them exceeding strong, having Judah and Benjamin on his side.
Matthew Henry
Concise Bible Commentary
A few good words might have prevented the rebellion of Rehoboam's subjects; but all the force of his kingdom cannot bring them back. And it is in vain to contend with the purpose of God, when it is made known to us. Even those who are destitute of true faith, will at times pay some regard to the word of God, and be kept by it from wrong actions, to which they are prone by nature.
Was this helpful?
Ellen G. White
Prophets and Kings, 91-3

The breach created by the rash speech of Rehoboam proved irreparable. Thenceforth the twelve tribes of Israel were divided, the tribes of Judah and Benjamin composing the lower or southern kingdom of Judah, under the rulership of Rehoboam; while the ten northern tribes formed and maintained a separate government, known as the kingdom of Israel, with Jeroboam as their ruler. Thus was fulfilled the prediction of the prophet concerning the rending of the kingdom. “The cause was from the Lord.” Verse 15. PK 91.1

When Rehoboam saw the ten tribes withdrawing their allegiance from him, he was aroused to action. Through one of the influential men of his kingdom, “Adoram, who was over the tribute,” he made an effort to conciliate them. But the ambassador of peace received treatment which bore witness to the feeling against Rehoboam. “All Israel stoned him with stones, that he died.” Startled by this evidence of the strength of revolt, “King Rehoboam made speed to get him up to his chariot, to flee to Jerusalem.” Verse 18. PK 91.2

At Jerusalem “he assembled all the house of Judah, with the tribe of Benjamin, an hundred and fourscore thousand chosen men, which were warriors, to fight against the house of Israel, to bring the kingdom again to Rehoboam the son of Solomon. But the word of God came unto Shemaiah the man of God, saying, Speak unto Rehoboam, the son of Solomon, king of Judah, and unto all the house of Judah and Benjamin, and to the remnant of the people, saying, Thus saith the Lord, Ye shall not go up, nor fight against your brethren the children of Israel: return every man to his house; for this thing is from Me. They hearkened therefore to the word of the Lord, and returned to depart, according to the word of the Lord.” Verses 21-24. PK 91.3

The Campaign of Shishak 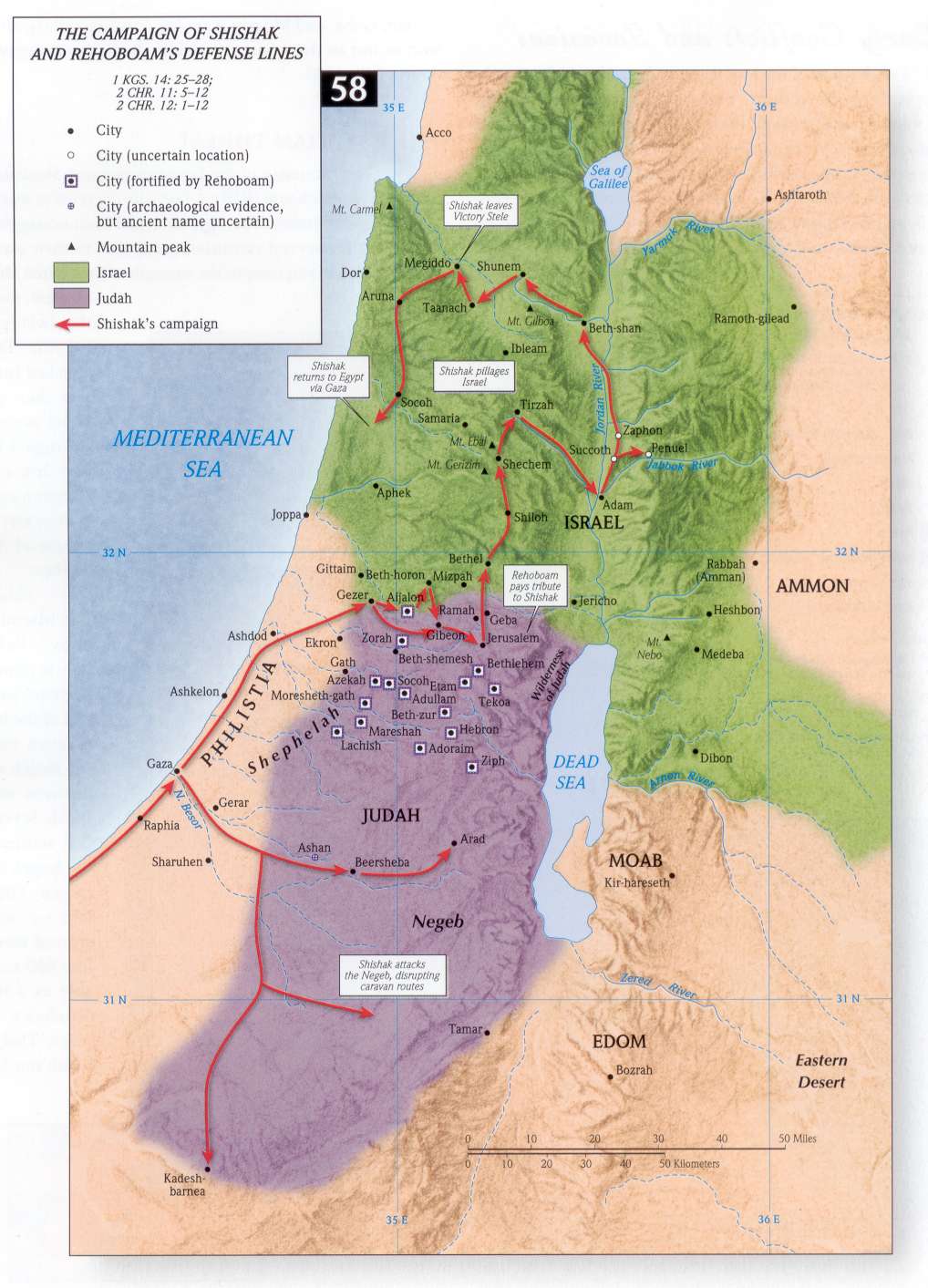