King James Version (KJV)
For they came up with their cattle and their tents, and they came as grasshoppers for multitude; for both they and their camels were without number: and they entered into the land to destroy it.
Adam Clarke
Bible Commentary

They came up with their cattle and their tents - All this proves that they were different tribes of wanderers who had no fixed residence; but, like their descendants the Bedouins or wandering Arabs, removed from place to place to get prey for themselves and forage for their cattle.

Was this helpful?
Matthew Henry
Concise Bible Commentary
Israel's sin was renewed, and Israel's troubles were repeated. Let all that sin expect to suffer. The Israelites hid themselves in dens and caves; such was the effect of a guilty conscience. Sin dispirits men. The invaders left no food for Israel, except what was taken into the caves. They prepared that for Baal with which God should have been served, now God justly sends an enemy to take it away in the season thereof.
Was this helpful?
Ellen G. White
Patriarchs and Prophets, 546

Gideon was the son of Joash, of the tribe of Manasseh. The division to which this family belonged held no leading position, but the household of Joash was distinguished for courage and integrity. Of his brave sons it is said, “Each one resembled the children of a king.” All but one had fallen in the struggles against the Midianites, and he had caused his name to be feared by the invaders. To Gideon came the divine call to deliver his people. He was engaged at the time in threshing wheat. A small quantity of grain had been concealed, and not daring to beat it out on the ordinary threshing floor, he had resorted to a spot near the winepress; for the season of ripe grapes being still far off, little notice was now taken of the vineyards. As Gideon labored in secrecy and silence, he sadly pondered upon the condition of Israel and considered how the oppressor's yoke might be broken from off his people. PP 546.1

Suddenly the “Angel of the Lord” appeared and addressed him with the words, “Jehovah is with thee, thou mighty man of valor.” PP 546.2

“O my Lord,” was his answer, “if the Lord be with us, why then is all this befallen us? and where be all His miracles which our fathers told us of, saying, Did not the Lord bring us up from Egypt? but now the Lord hath forsaken us, and delivered us into the hands of the Midianites.” PP 546.3

Read in context »
Was this helpful?
Ellen G. White
Patriarchs and Prophets, 545-8

“They forsook the Lord God of their fathers, which brought them out of the land of Egypt,” “and guided them in the wilderness like a flock.” “They provoked Him to anger with their high places, and moved Him to jealousy with their graven images.” Therefore the Lord “forsook the tabernacle of Shiloh, the tent which He placed among them; and delivered His strength into captivity, and His glory into the enemy's hand.” Judges 2:12; Psalm 78:52, 58, 60, 61. Yet He did not utterly forsake His people. There was ever a remnant who were true to Jehovah; and from time to time the Lord raised up faithful and valiant men to put down idolatry and to deliver the Israelites from their enemies. But when the deliverer was dead, and the people were released from his authority, they would gradually return to their idols. And thus the story of backsliding and chastisement, of confession and deliverance, was repeated again and again. PP 545.1

The king of Mesopotamia, the king of Moab, and after them the Philistines, and the Canaanites of Hazor, led by Sisera, in turn became the oppressors of Israel. Othniel, Shamgar, and Ehud, Deborah and Barak, were raised up as deliverers of their people. But again “the children of Israel did evil in the sight of the Lord; and the Lord delivered them into the hand of Midian.” Heretofore the hand of the oppressor had fallen but lightly on the tribes dwelling east of the Jordan, but in the present calamities they were the first sufferers. PP 545.2

The Amalekites on the south of Canaan, as well as the Midianites on its eastern border, and in the deserts beyond, were still the unrelenting enemies of Israel. The latter nation had been nearly destroyed by the Israelites in the days of Moses, but they had since increased greatly, and had become numerous and powerful. They had thirsted for revenge; and now that the protecting hand of God was withdrawn from Israel, the opportunity had come. Not alone the tribes east of Jordan, but the whole land suffered from their ravages. The wild, fierce inhabitants of the desert, “as locusts for multitude” (Judges 6:5, R.V.), came swarming into the land, with their flocks and herds. Like a devouring plague they spread over the country, from the river Jordan to the Philistine plain. They came as soon as the harvests began to ripen, and remained until the last fruits of the earth had been gathered. They stripped the fields of their increase and robbed and maltreated the inhabitants and then returned to the deserts. Thus the Israelites dwelling in the open country were forced to abandon their homes, and to congregate in walled towns, to seek refuge in fortresses, or even to find shelter in caves and rocky fastnesses among the mountains. For seven years this oppression continued, and then, as the people in their distress gave heed to the Lord's reproof, and confessed their sins, God again raised up a helper for them. PP 545.3

Gideon's Battles with the Amalekites 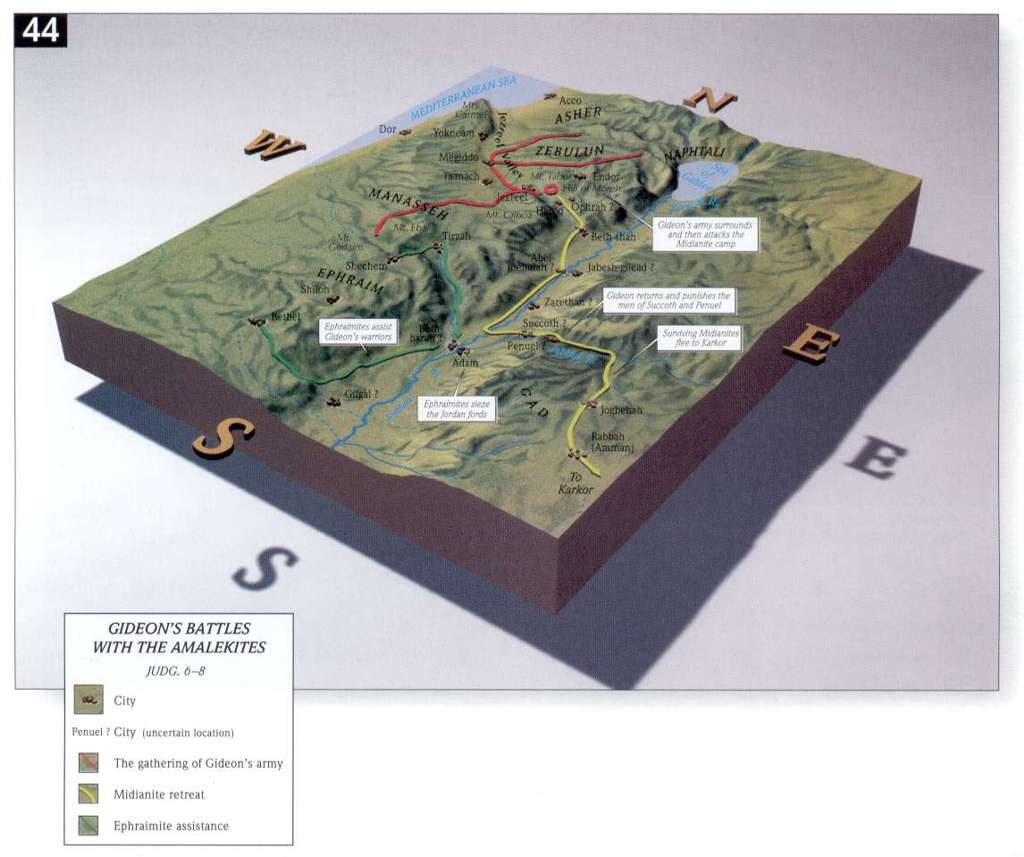