King James Version (KJV)
And of his fulness have all we received, and grace for grace.
Albert Barnes
Notes on the Whole Bible

Of his fulness - In John 1:14 the evangelist has said that Christ was “full of grace and truth.” Of that “fullness” he now says that all the disciples had received; that is, they derived from his abundant truth and mercy grace to understand the plan of salvation, to preach the gospel, to live lives of holiness; they “partook” of the numerous blessings which he came to impart by his instructions and his death. These are undoubtedly not the words of John the Baptist, but of the evangelist John, the writer of this gospel. They are a continuation of what he was saying in John 1:14, John 1:15 being evidently thrown in as a parenthesis. The declaration had not exclusive reference, probably, to the apostles, but it is extended to all Christians, for all believers have received of the “fulness of grace and truth” that is in Christ. Compare Ephesians 1:23; Ephesians 3:19; Colossians 1:19; Colossians 2:9. In all these places our Saviour is represented as the fulness of God - as “abounding” in mercy, as exhibiting the divine attributes, and as possessing in himself all that is necessary to fill his people with truth, and grace, and love.

Grace for grace - Many interpretations of this phrase have been proposed. The chief are briefly the following:

1.“We have received under the gospel, grace or favor, ‹instead of‘ those granted under the law; and God has added by the gospel important favors to those which he gave under the law.” This was first proposed by Chrysostom.

2.“We, Christians, have received grace ‹answering to,‘ or corresponding to that which is in Jesus Christ. We are ‹like‘ him in meekness, humility,” etc.

3.“We have received grace ‹as grace‘ - that is, freely. We have not purchased it nor deserved it, but God has conferred it on us ‹freely‘” (Grotius).

4.The meaning is, probably, simply that we have received through him “abundance” of grace or favor. The Hebrews, in expressing the superlative degree of comparison, used simply to repeat the word - thus, “pits, pits,” meaning many pits (Hebrew in Genesis 14:10). So here grace for grace may mean “much” grace; superlative favors bestowed on man; favors superior to all that had been under the law - superior to all other things that God can confer on men. These favors consist in pardon, redemption, protection, sanctification, peace here, and heaven hereafter.

Was this helpful?
Matthew Henry
Concise Bible Commentary
As to the order of time and entrance on his work, Christ came after John, but in every other way he was before him. The expression clearly shows that Jesus had existence before he appeared on earth as man. All fulness dwells in him, from which alone fallen sinners have, and shall receive, by faith, all that renders them wise, strong, holy, useful, and happy. Our receivings by Christ are all summed up in this one word, grace; we have received "even grace," a gift so great, so rich, so invaluable; the good will of God towards us, and the good work of God in us. The law of God is holy, just, and good; and we should make the proper use of it. But we cannot derive from it pardon, righteousness, or strength. It teaches us to adorn the doctrine of God our Saviour, but it cannot supply the place of that doctrine. As no mercy comes from God to sinners but through Jesus Christ, no man can come to the Father but by him; no man can know God, except as he is made known in the only begotten and beloved Son.
Was this helpful?
SDA Bible Commentary (limited)
Volume 1-7

Grace for grace. Probably meaning, “grace added to grace.” Day by day every true believer goes to the heavenly storehouse for divine grace sufficient to meet the needs of the day. Daily he grows in grace and in understanding God’s purpose for his life (cf. 2 Peter 3:18). He advances steadily toward the goal of a perfect character (see Matt. 5:48).

This verse should be put in place of the fifteenth, and the 15th inserted between the 18th and 19th, which appears to be its proper place: thus John's testimony is properly connected.

And of his fullness - Of the plenitude of his grace and mercy, by which he made an atonement for sin; and of the plenitude of his wisdom and truth, by which the mysteries of heaven have been revealed, and the science of eternal truth taught, we have all received: all we apostles have received grace or mercy to pardon our sins, and truth to enable us so to write and speak, concerning these things, that those who attend to our testimony shall be unerringly directed in the way of salvation, and with us continue to receive grace upon grace, one blessing after another, till they are filled with all the fullness of God. I believe the above to be the meaning of the evangelist, and think it improper to distract the mind of the reader with the various translations and definitions which have been given of the phrase, grace for grace. It is only necessary to add, that John seems here to refer to the Gospel as succeeding the law: the law was certainly a dispensation both of grace and truth; for it pointed out the gracious design of God to save men by Christ Jesus; and it was at least a most expressive and well-defined shadow of good things to come: but the Gospel, which had now taken place, introduced that plenitude of grace and truth to the whole world, which the law had only shadowed forth to the Jewish people, and which they imagined should have been restrained to themselves alone. In the most gracious economy of God, one dispensation of mercy and truth is designed to make way for, and to be followed by, another and a greater: thus the law succeeded the patriarchal dispensation, and the Gospel the law; more and more of the plenitude of the grace of the Gospel becomes daily manifest to the genuine followers of Christ; and, to those who are faithful unto death, a heaven full of eternal glory will soon succeed to the grace of the Gospel. To illustrate this point more fully, the following passage in Philo the Jew has been adduced: "God is always sparing of his first blessings or graces, (πρωτας χαριτας ), and afterwards gives other graces upon them, (αντ 'εκεινων ), and a third sort upon the second, and always new ones upon old ones, sometimes of a different kind, and at other times of the same sort." Vol. i. p. 254, ed. Mang. In the above passage the preposition αντι for, is used thrice in the sense of επι, upon. To confirm the above interpretation Bp. Pearce produces the following quotations. Ecclus 24:15: Χαρις επι χαριτι γυνη αισχυντηρα - A modest woman is a grace upon a grace, i.e. a double grace or blessing. Euripides uses the very same phrase with John, where he makes Theoclymenus say to Helena. Χαρις αντι χαριτος ελθετω, May grace upon grace come to you! Helen v. 1250. ed. Barn.

Was this helpful?
Ellen G. White
The Desire of Ages, 250

Jesus chose unlearned fishermen because they had not been schooled in the traditions and erroneous customs of their time. They were men of native ability, and they were humble and teachable,—men whom He could educate for His work. In the common walks of life there is many a man patiently treading the round of daily toil, unconscious that he possesses powers which, if called into action, would raise him to an equality with the world's most honored men. The touch of a skillful hand is needed to arouse those dormant faculties. It was such men that Jesus called to be His colaborers; and He gave them the advantage of association with Himself. Never had the world's great men such a teacher. When the disciples came forth from the Saviour's training, they were no longer ignorant and uncultured. They had become like Him in mind and character, and men took knowledge of them that they had been with Jesus. DA 250.1

It is not the highest work of education to communicate knowledge merely, but to impart that vitalizing energy which is received through the contact of mind with mind, and soul with soul. It is only life that can beget life. What privilege, then, was theirs who for three years were in daily contact with that divine life from which has flowed every life-giving impulse that has blessed the world! Above all his companions, John the beloved disciple yielded himself to the power of that wondrous life. He says, “The life was manifested, and we have seen it, and bear witness, and show unto you that eternal life, which was with the Father, and was manifested unto us.” “Of His fullness have all we received, and grace for grace.” 1 John 1:2; John 1:16. DA 250.2

In the apostles of our Lord there was nothing to bring glory to themselves. It was evident that the success of their labors was due only to God. The lives of these men, the characters they developed, and the mighty work that God wrought through them, are a testimony to what He will do for all who are teachable and obedient. DA 250.3

Satan is busily working with all who will give him encouragement. Those who have the light, but refuse to walk in it, will become confused, until darkness pervades their souls, and shapes their whole course of action. But the spirit of wisdom and goodness of God as revealed in His Word, will become brighter and brighter as they follow on in the path of true obedience. All the righteous demands of God will be met through sanctification of the Holy Spirit.…  1SM 166.1

There are great privileges and blessings for all who will humble themselves and fully consecrate their hearts to God. Great light will be given to them. When men are willing to be transformed, then they will be exercised unto godliness. 1SM 166.2

“And of his fulness have all we received, and grace for grace” (John 1:16). “My grace is sufficient for thee: for my strength is made perfect in weakness” (2 Corinthians 12:9). Says the Saviour: “All power is given unto me in heaven and in earth. Go ye therefore, and teach all nations, baptizing them in the name of the Father, and of the Son, and of the Holy Ghost: teaching them to observe all things whatsoever I have commanded you: and, lo, I am with you alway, even unto the end of the world” (Matthew 28:18-20). 1SM 166.3

Read in context »
Was this helpful?
Ellen G. White
Thoughts From the Mount of Blessing, 21

God has poured out His love unstintedly, as the showers that refresh the earth. He says, “Let the skies pour down righteousness: let the earth open, and let them bring forth salvation, and let righteousness spring up together.” “When the poor and needy seek water, and there is none, and their tongue faileth for thirst, I the Lord will hear them, I the God of Israel will not forsake them. I will open rivers in high places, and fountains in the midst of the valleys: I will make the wilderness a pool of water, and the dry land springs of water.” Isaiah 45:8; 41:17, 18. MB 21.1

We have every encouragement that, if we daily surrender our wills to God, the promise will be fulfilled, “And of his fulness have we all received, and grace for grace” (John 1:16). Every revealing of the grace of Christ in our behalf is for us. We are to reveal His grace in our lives, in thought, word, and deed. Let us not lose our opportunity to speak and act Christ Jesus. We are to represent the mercy, the love, and the power of Christ—the power that He has given us.... TDG 329.3 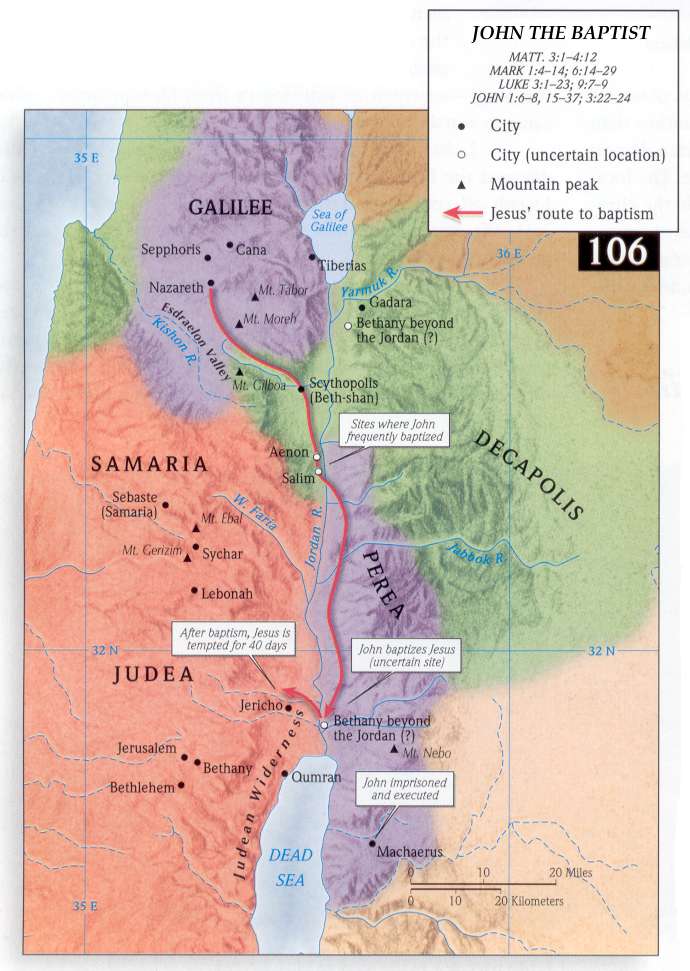 Jesus' Ministry according to John