King James Version (KJV)
And it came to pass in the days of Ahaz the son of Jotham, the son of Uzziah, king of Judah, that Rezin the king of Syria, and Pekah the son of Remaliah, king of Israel, went up toward Jerusalem to war against it, but could not prevail against it.
Albert Barnes
Notes on the Whole Bible

In the days of Ahaz - Ahaz began to reign about 738 years before Christ. By a comparison of 2 Kings 16:5, … , with 2 Chronicles 28:5, etc., it will be seen that Judea was twice invaded by Rezin and Pekah in the reign of Ahaz; see the Analysis of the chapter.

That Rezin … - This confederacy was formed in the time of Jotham; 2 Kings 15:37. But it was not carried into execution during his reign. It is evident from this place, that it was executed in the early part of the reign of Ahaz; probably in the first or second year of his reign.

Syria - - ארם 'ărâm so called from Aram Genesis 10:22-23, a son of Shem, and who populated its chief provinces. It comprehended the country lying between the Euphrates east, the Mediterranean west, Cilicia north, and Phenicia, Judea, and Arabia south; see the notes at Isaiah 17:1-14. Syria of the two rivers is Mesopotamia. Syria of Damascus, so called because Damascus was its capital, extended eastward along Mount Libanus, but its limits varied according to the power of the princes of Damascus. After the reign of the Seleucidae, Syria came to denote the kingdom or region of which Antioch was the capital. Here it denotes the Syria lying around Damascus, and of which Damascus was the capital. - “Calmet.”

King of Israel - Of the ten tribes, called the kingdom of Israel, or Samaria; Note, Isaiah 1:1.

Went up - Jerusalem was situated on hills, and on the highest part of the land. But it is possible that this language is derived from the fact that it was the capital. The language is used even when the region from which the traveler comes does not lie lower than the city. Thus it is not uncommon to speak of “going up” to London, Paris, etc.

Could not prevail - Hebrew, ‹Could not fight against it,‘ that is, with happy result, or with success. He was not able to take it. That the allied kings really besieged Ahaz, is evident from 2 Kings 16:5: They ‹came up to Jerusalem to war, and they besieged Ahaz, but they could not overcome him.‘ The reason why they could not take Jerusalem was, probably, not only because it was a strong place and well defended, but because there was intelligence that their own dominions were threatened with an invasion by the Assyrians, and they could not protract their siege of Jerusalem long enough to take it.

Was this helpful?
Matthew Henry
Concise Bible Commentary
Ungodly men are often punished by others as bad as themselves. Being in great distress and confusion, the Jews gave up all for lost. They had made God their enemy, and knew not how to make him their friend. The prophet must teach them to despise their enemies, in faith and dependence on God. Ahaz, in fear, called them two powerful princes. No, says the prophet, they are but tails of smoking firebrands, burnt out already. The two kingdoms of Syria and Israel were nearly expiring. While God has work for the firebrands of the earth, they consume all before them; but when their work is fulfilled, they will be extinguished in smoke. That which Ahaz thought most formidable, is made the ground of their defeat; because they have taken evil counsel against thee; which is an offence to God. God scorns the scorners, and gives his word that the attempt should not succeed. Man purposes, but God disposes. It was folly for those to be trying to ruin their neighbours, who were themselves near to ruin. Isaiah must urge the Jews to rely on the assurances given them. Faith is absolutely necessary to quiet and compose the mind in trials.
Was this helpful?
More Comments
Cross References
the days
2 Kings 16:1
2 Chronicles 28:1
2 Chronicles 28:2
2 Chronicles 28:3
2 Chronicles 28:4
2 Chronicles 28:5
2 Chronicles 28:6
Rezin
Isaiah 8:6
2 Kings 15:37
Psalms 83:3
Psalms 83:4
Psalms 83:5
but could
Isaiah 7:4
Isaiah 7:5
Isaiah 7:6
Isaiah 7:7
Isaiah 7:8
Isaiah 7:9
Isaiah 8:9
Isaiah 8:10
The Syro-Ephraimite War 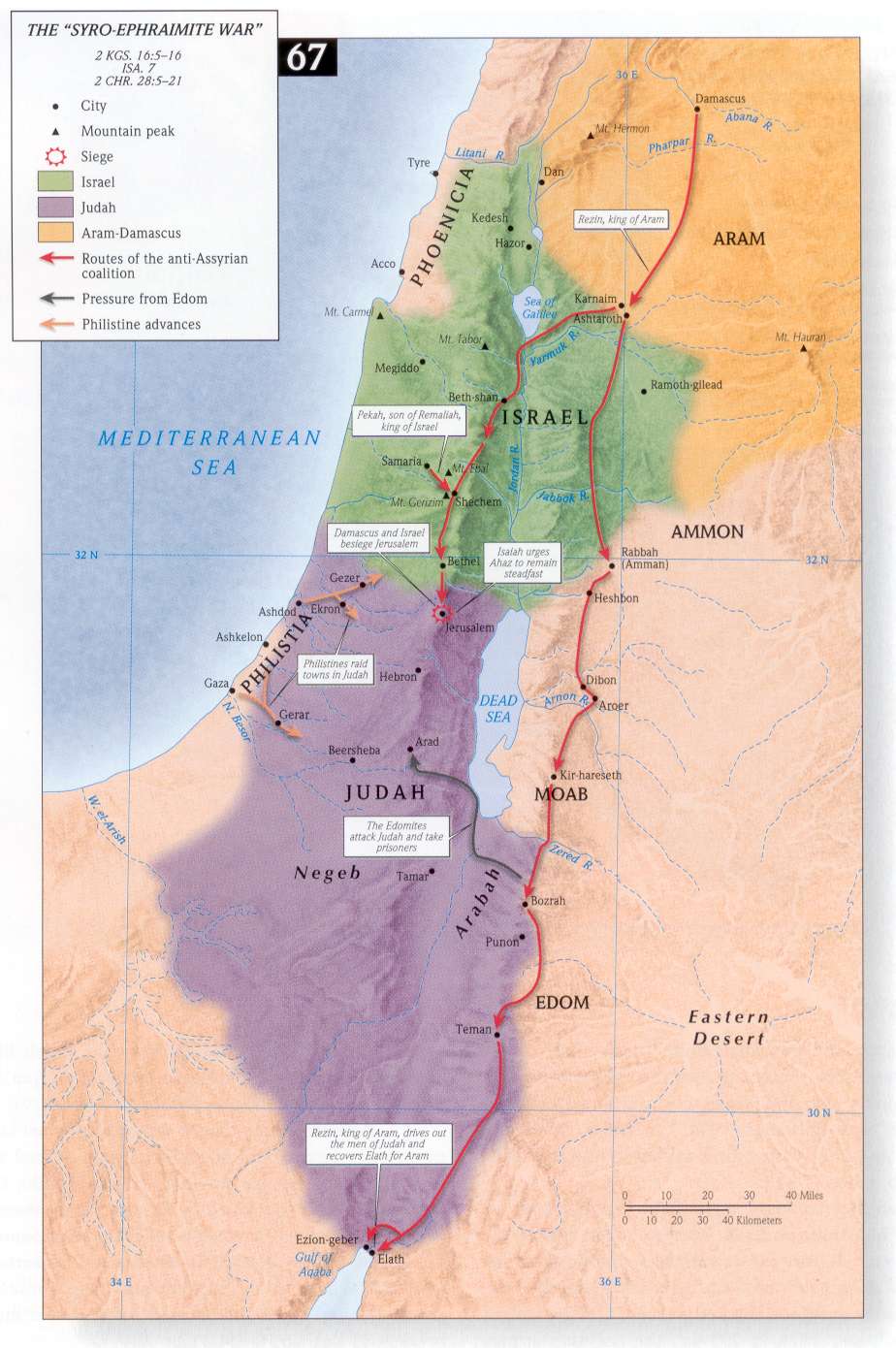 The Fall of the Kingdom of Israel