King James Version (KJV)
Take, I pray thee, my blessing that is brought to thee; because God hath dealt graciously with me, and because I have enough. And he urged him, and he took it.
Albert Barnes
Notes on the Whole Bible
Verses 1-20

Jacob has a friendly interview with Esau, and re-+enters Kenaan.

Jacob, upon seeing Esau approach with his four hundred men, advances with circumspection and lowly obeisance. He divided his family, arranged them according to their preciousness in his eyes, and walks himself in front. In drawing near, he bows seven times, in token of complete submission to his older brother. Esau, the wild hunter, is completely softened, and manifests the warmest affection, which is reciprocated by Jacob. The puncta extraordinaria over וישׁקהוּ vayı̂shēqēhû “and kissed him,” seemingly intimating a doubt of the reading or of the sincerity of Esau, are wholly unwarranted. Esau then observes the women and children, and inquires who they are. Jacob replies that God had granted, graciously bestowed on him, these children. They approach in succession, and do obeisance. Esau now inquires of the caravan or horde he had already met. He had heard the announcement of the servants; but he awaited the confirmation of the master. “To find grace in the eyes of my lord.” Jacob values highly the good-will of his brother. The acceptance of this present is the security for that good-will, and for all the safety and protection which it involved. Esau at first declines the gift, but on being urged by Jacob accepts it, and thereby relieves Jacob of all his anxiety. His brother is now his friend indeed. “Therefore, have I seen thy face,” that I might give thee this token of my affection. “As if I had seen the face of God.” The unexpected kindness with which his brother had received him was a type and proof of the kindness of the All-provident, by whom it had been added to all his other mercies. My blessing; my gift which embodies my good wishes. I have all; not only enough, but all that I can wish.

They now part for the present. “I will qo with thee;” as an escort or vanguard. Jacob explains that this would be inconvenient for both parties, as his tender children and suckling cattle could not keep pace with Esau‘s men, who were used to the road. “At the pace of the cattle;” as fast as the business (מלאכה melā'kâh ) of traveling with cattle will permit. Unto Selr. Jacob is travelling to the land of Kenaan, and to the residence of his father. But, on arriving there, it will be his first duty to return the fraternal visit of Esau. The very circumstance that he sent messengers to apprise his brother of his arrival, implies that he was prepared to cultivate friendly relations with him. Jacob also declines the offer of some of the men that Esau had with him. He had, doubtless, enough of hands to manage his remaining flock, and he now relied more than ever on the protection of that God who had ever proved himself a faithful and effectual guardian.

“Sukkoth” was south of the Jabbok, and east of the Jordan, as we learn from Judges 8:4-9. From the same passage it appears to have been nearer the Jordan than Penuel, which was at the ford of Jahbok. Sukkoth cannot therefore, be identified with Sakut, which Robinson finds on the other side of the Jordan, about ten miles north of the mouth of the Jabbok. “And built him a house.” This indicates a permanent residence. Booths, or folds, composed of upright stakes wattled together, and sheltered with leafy branches. The closed space in the text is properly introduced here, to indicate the pause in the narrative, while Jacob sojourned in this place. Dinah, who is not noticed on the journey, was now not more than six years of age. Six or seven years more, therefore, must have elapsed before the melancholy events of the next chapter took place. In the interval, Jacob may have visited his father, and even returned the visit of Esau.

Jacob at length crosses the Jordan, and enters again the land of Kenaan. “In peace.” The original word (שׁלם shālēm “safe, in peace”) is rendered Shalem, the name of the town at which Jacob arrived, by the Septuagint. The rendering safe, or in peace, is here adopted, because (1) the word is to be taken as a common noun or adjective, unless there be a clear necessity for a proper name; (2) “the place” was called Shekem in the time of Abraham Genesis 12:6, and the “town” is so designated in the thirty-fifth chapter Genesis 35:4; and (3) the statement that Jacob arrived in safety accounts for the additional clauses, “which is in the land of Kenaan,” and “when he went from Padan-aram,” and is in accordance with the promise Genesis 28:21 that he would return in peace. If, however, the Salim found by Robinson to the west of Nablous be the present town, it must be called the city of Shekem, because it belonged to the Shekem mentioned in the following verse and chapter. “Pitched before the city.”

Jacob did not enter into the city, because his flocks and herds could not find accommodation there, and he did not want to come into close contact with the inhabitants. “He bought a parcel of the field.” He is anxious to have a place he may call his own, where he may have a permanent resting-place. “For a hundred kesitahs.” The kesitah may have been a piece of silver or gold, of a certain weight, equal in value to a lamb (see Gesenius). “El-Elohe-Israel.” Jacob consecrates his ground by the erection of an altar. He calls it the altar of the Mighty One, the God of Israel, in which he signalizes the omnipotence of him who had brought him in safety to the land of promise through many perils, the new name by which he himself had been lately designated, and the blessed communion which now existed between the Almighty and himself. This was the very spot where Abraham, about one hundred and eighty-five years ago, built the first altar he erected in the promised land Genesis 12:6-7. It is now consecrated anew to the God of promise.

Was this helpful?
Matthew Henry
Concise Bible Commentary
Jacob, having by prayer committed his case to God, went on his way. Come what will, nothing can come amiss to him whose heart is fixed, trusting in God. Jacob bowed to Esau. A humble, submissive behaviour goes far towards turning away wrath. Esau embraced Jacob. God has the hearts of all men in his hands, and can turn them when and how he pleases. It is not in vain to trust in God, and to call upon him in the day of trouble. And when a man's ways please the Lord he maketh even his enemies to be at peace with him. Esau receives Jacob as a brother, and much tenderness passes between them. Esau asks, Who are those with thee? To this common question, Jacob spoke like himself, like a man whose eyes are ever directed towards the Lord. Jacob urged Esau, though his fear was over, and he took his present. It is well when men's religion makes them generous, free-hearted, and open-handed. But Jacob declined Esau's offer to accompany him. It is not desirable to be too intimate with superior ungodly relations, who will expect us to join in their vanities, or at least to wink at them, though they blame, and perhaps mock at, our religion. Such will either be a snare to us, or offended with us. We shall venture the loss of all things, rather than endanger our souls, if we know their value; rather than renounce Christ, if we truly love him. And let Jacob's care and tender attention to his family and flocks remind us of the good Shepherd of our souls, who gathers the lambs with his arm, and carries them in his bosom, and gently leads those that are with young, Isa 40:11. As parents, teachers or pastors, we should all follow his example.
Was this helpful?
Ellen G. White
Patriarchs and Prophets, 198

Jacob had received the blessing for which his soul had longed. His sin as a supplanter and deceiver had been pardoned. The crisis in his life was past. Doubt, perplexity, and remorse had embittered his existence, but now all was changed; and sweet was the peace of reconciliation with God. Jacob no longer feared to meet his brother. God, who had forgiven his sin, could move the heart of Esau also to accept his humiliation and repentance. PP 198.1

While Jacob was wrestling with the Angel, another heavenly messenger was sent to Esau. In a dream, Esau beheld his brother for twenty years an exile from his father's house; he witnessed his grief at finding his mother dead; he saw him encompassed by the hosts of God. This dream was related by Esau to his soldiers, with the charge not to harm Jacob, for the God of his father was with him. PP 198.2

The two companies at last approached each other, the desert chief leading his men of war, and Jacob with his wives and children, attended by shepherds and handmaidens, and followed by long lines of flocks and herds. Leaning upon his staff, the patriarch went forward to meet the band of soldiers. He was pale and disabled from his recent conflict, and he walked slowly and painfully, halting at every step; but his countenance was lighted up with joy and peace. PP 198.3

At sight of that crippled sufferer, “Esau ran to meet him, and embraced him, and fell on his neck, and kissed him: and they wept.” As they looked upon the scene, even the hearts of Esau's rude soldiers were touched. Notwithstanding he had told them of his dream, they could not account for the change that had come over their captain. Though they beheld the patriarch's infirmity, they little thought that this his weakness had been made his strength. PP 198.4

In his night of anguish beside the Jabbok, when destruction seemed just before him, Jacob had been taught how vain is the help of man, how groundless is all trust in human power. He saw that his only help must come from Him against whom he had so grievously sinned. Helpless and unworthy, he pleaded God's promise of mercy to the repentant sinner. That promise was his assurance that God would pardon and accept him. Sooner might heaven and earth pass than that word could fail; and it was this that sustained him through that fearful conflict. PP 198.5 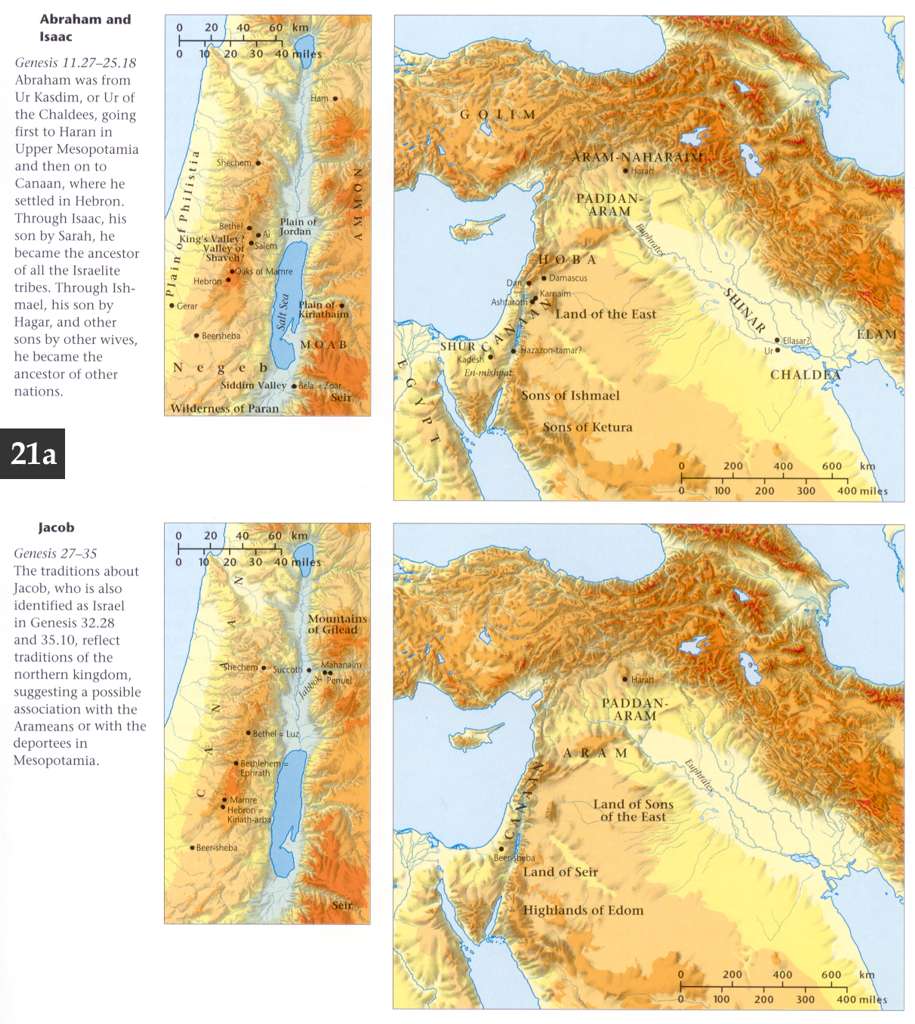 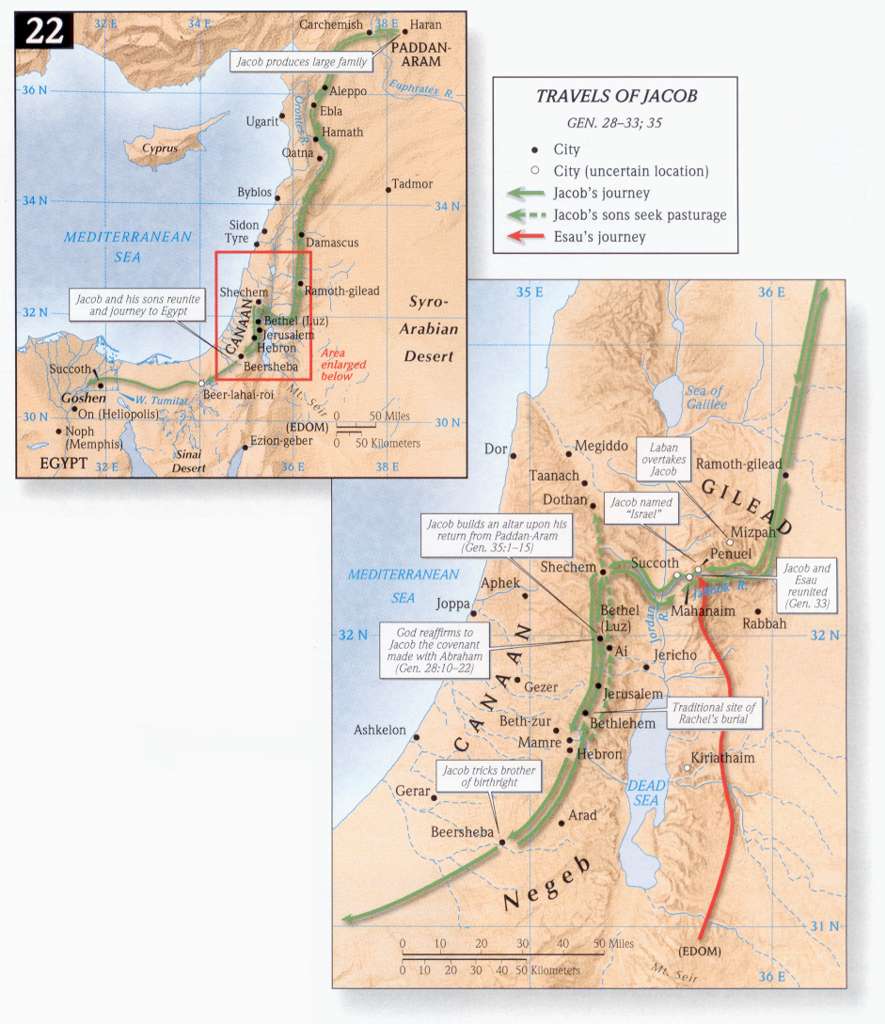