Which came with Zerubbabel - There are many difficulties in this table of names; but as we have no less than three copies of it, that contained here from Ezra 2:1-67, a second in Nehemiah 7:6-69, and a third in 1 Esdras 5:7-43, on a careful examination they will be found to correct each other. The versions also, and the Variae Lectiones of Kennicott and De Rossi, do much toward harmonizing the names.

Though the sum total at the end of each of these enumerations is equal, namely 42,360, yet the particulars reckoned up make in Ezra only 29,818, and in Nehemiah 31,089. We find that Nehemiah mentions 1765 persons which are not in Ezra, and Ezra has 494 not mentioned by Nehemiah. Mr. Alting thinks that this circumstance, which appears to render all hope of reconciling them impossible, is precisely the very point by which they can be reconciled; for if we add Ezra's surplus to the sum in Nehemiah, and the surplus of Nehemiah to the number in Ezra, the numbers will be equal.

If we subtract this sum 31,583 from 42,360, we shall have a deficiency of 10,777 from the numbers as summed up in the text; and these are not named here, either because their registers were not found, or they were not of Judah and Benjamin, the tribes particularly concerned, but of the other Israelitish tribes; see Ezra 2:36.

2. Zerubbabel. The political leader of the returning exiles. In ch. 3:2 and elsewhere he is called the son of Shealtiel. In 1 Chron. 3:19, however, he is listed among the sons of Pedaiah, a brother of Shealtiel. This seeming discrepancy can be explained by assuming a levirate marriage (see on Deut. 25:5-10) between Shealtiel’s childless widow and his brother Pedaiah, whose first male child by such a marriage would be considered the heir of Shealtiel (see on Matt. 1:12). Zerubbabel, though actually the son of Pedaiah, is called the son of Shealtiel in a majority of the passages that refer to him. The fact that in the only place where Zerubbabel is called Pedaiah’s son, Shealtiel appears without children, though older than his brother Pedaiah, supports the theory of a levirate marriage.

Haggai (ch. 1:1) speaks of Zerubbabel, a grandson of King Jehoiachin, as governor of Judah. Cyrus thus appointed the descendant of a former king of Judah to rule in the name of the Persian king, a choice with which Cyrus could expect the Jews to be pleased. They would naturally accord more willing service to one of their own princes than to a foreigner.

Jeshua. Yeshua‘ is the Aramaic form of the Hebrew name usually translated “Joshua.” This Jeshua was the spiritual leader of the returning exiles, the “high priest” of Haggai 1:1 and Zech. 3:1, and is referred to also in Ezra 3:2; Neh. 12:1; etc. He was a direct descendant of Aaron, through his father Jozadak, high priest at the time of Nebuchadnezzar’s captivity (1 Chron. 6:3-15; Ezra 3:2). Jeshua was probably born in exile, since he lived to see the completion of the Temple 20 years after the return to Jerusalem.

Thus, two men of the old Jewish nobility led out in the restoration of Judah, one a descendant of the former reigning house as the appointed political leader, and the other a son of the last precaptivity high priest as spiritual head. Their names may have been suggested to Cyrus by a trusted counselor, such as Daniel, and both were no doubt chosen because of sterling character and because they enjoyed the confidence of their people.

Nehemiah. The function of the other ten leaders here enumerated is unknown, inasmuch as their names do not appear again except in the duplicate list of Neh. 7. They may have been the elders mentioned frequently in later passages (see ch. 5:5, 9; etc.).

The number of the men. The following list of exiles shows the importance attached by the Jews to ancestral lists. Though transported to Babylonia under the most miserable conditions imaginable, many had apparently succeeded in preserving their genealogical documents. Some, however, had not been so successful, and could not prove their pedigree. (v. 59).

The numbers of persons in the various family groups here given differ slightly from those of a duplicate list Nehemiah used almost a century later to guide him in the resettlement of Jerusalem. Of the 42 numbers given by Ezra (vs. 3-60), 18 differ from the corresponding numbers in Neh. 7. The differences are small, and can be explained by assuming that the lists were drawn up at different times, and that during the interval the population figures varied, owing to deaths and births, or for other reasons.

“The chief of the fathers of Judah and Benjamin, and the priests, and the Levites, with all them whose spirit God had raised”—these were the goodly remnant, about fifty thousand strong, from among the Jews in the lands of exile, who determined to take advantage of the wonderful opportunity offered them “to go up to build the house of the Lord which is in Jerusalem.” Their friends did not permit them to go empty-handed. “All they that were about them strengthened their hands with vessels of silver, with gold, with goods, and with beasts, and with precious things.” And to these and many other voluntary offerings were added “the vessels of the house of the Lord, which Nebuchadnezzar had brought forth out of Jerusalem; ... even those did Cyrus king of Persia bring forth by the hand of Mithredath the treasurer, ... five thousand and four hundred” in number, for use in the temple that was to be rebuilt. Ezra 1:5-11. PK 559.2 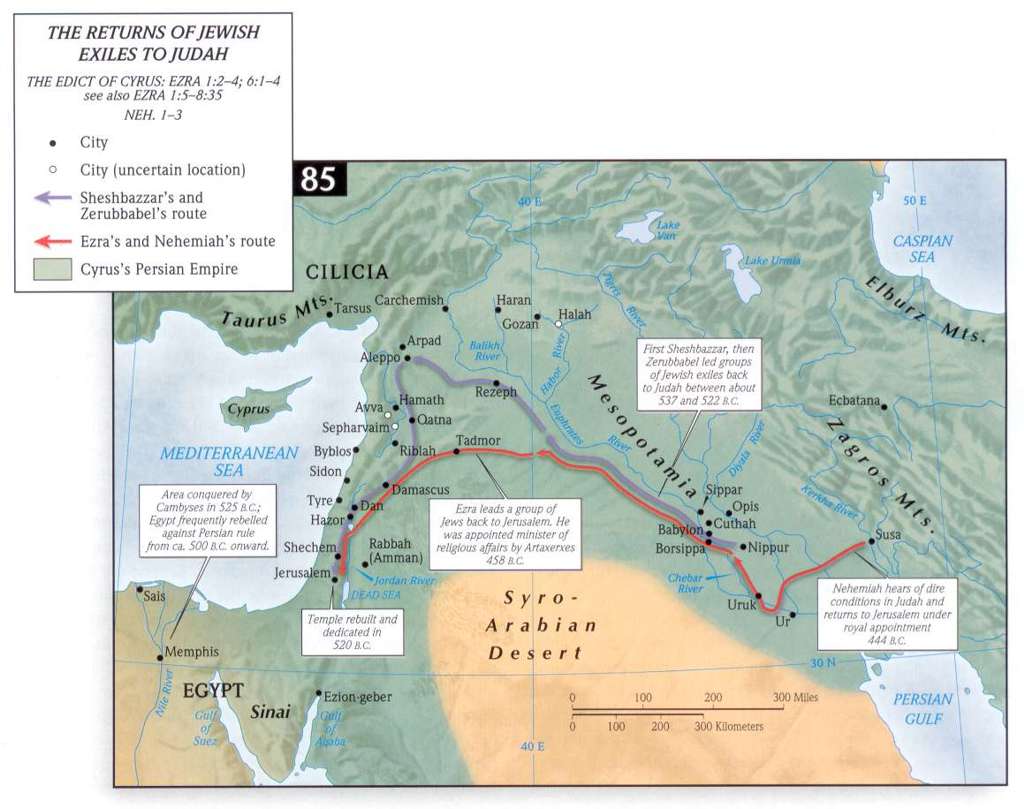