King James Version (KJV)
Therefore let all the house of Israel know assuredly, that God hath made that same Jesus, whom ye have crucified, both Lord and Christ.
Adam Clarke
Bible Commentary

Both Lord and Christ - Not only the Messiah, but the supreme Governor of all things and all persons, Jews and Gentiles, angels and men. In the preceding discourse, Peter assumes a fact which none would attempt to deny, viz. that Jesus had been lately crucified by them.

6. The Governor of the universe, from whose power and justice they had every thing to dread, as they refused to receive his proffered mercy and kindness.

Therefore let all … - “Convinced by the prophecies, by our testimony, and by the remarkable scenes exhibited on the day of Pentecost, let all be convinced that the true Messiah has come and has been exalted to heaven.”

House of Israel - The word “house” often means “family”: “let all the family of Israel, that is, all the nation of the Jews, know this.”

Know assuredly - Be assured, or know without any hesitation or possibility of mistake. This is the sum of his argument or his discourse. He had established the points which he purposed to prove, and he now applies it to his hearers.

That same Jesus - The very person who had suffered. He was raised with the same body, and had the same soul; he was the same being, as distinguished from all others. So Christians, in the resurrection, will be the same beings that they were before they died.

Whom ye have crucified - See Acts 2:23. There was nothing better suited to show them the guilt of having done this than the argument which Peter used. He showed them that God had sent him as the Messiah, and that he had showed his love for him in raising him from the dead. The Son of God, and the hope of their nation, they had put to death. He was not an impostor, nor a man sowing sedition, nor a blasphemer, but the Messiah of God; and they had imbrued their hands in his blood. There is nothing better suited to make sinners fear and tremble than to show them that, in rejecting Christ, they have rejected God; in refusing to serve him they have refused to serve God. The crime of sinners has a double malignity, as committed against a kind and lovely Saviour, and against the God who loved him, and appointed him to save people. Compare Acts 3:14-15.

Both Lord - The word “lord” properly denotes “proprietor, master, or sovereign.” Here it means clearly that God had exalted him to be the king so long expected; and that he had given him dominion in the heavens, or, as we should say, made him ruler of all things. The extent of this dominion may be seen in John 17:2; Ephesians 1:21, etc. In the exercise of this orifice, he now rules in heaven and on earth, and will yet come to judge the world. This truth was particularly suited to excite their fear. They had murdered their sovereign, now shown to be raised from the dead, and entrusted with infinite power. They had reason, therefore, to fear that he would come forth in vengeance, and punish them for their crimes. Sinners, in opposing the Saviour, are at war with their living and mighty sovereign and Lord. He has all power, and it is not safe to contend against the judge of the living and the dead.

And Christ - Messiah. They had thus crucified the hope of their nation; imbrued their hands in the blood of him to whom the prophets had looked; and put to death that Holy One, the prospect of whose coming had sustained the most holy men of the world in affliction, and cheered them when they looked on to future years. He who was the hope of their fathers had come, and they had put him to death; and it is no wonder that the consciousness of this - that a sense of guilt, and shame, and confusion should overwhelm their minds, and lead them to ask, in deep distress, what they should do.

Was this helpful?
Matthew Henry
Concise Bible Commentary
From this gift of the Holy Ghost, Peter preaches unto them Jesus: and here is the history of Christ. Here is an account of his death and sufferings, which they witnessed but a few weeks before. His death is considered as God's act; and of wonderful grace and wisdom. Thus Divine justice must be satisfied, God and man brought together again, and Christ himself glorified, according to an eternal counsel, which could not be altered. And as the people's act; in them it was an act of awful sin and folly. Christ's resurrection did away the reproach of his death; Peter speaks largely upon this. Christ was God's Holy One, sanctified and set apart to his service in the work of redemption. His death and sufferings should be, not to him only, but to all his, the entrance to a blessed life for evermore. This event had taken place as foretold, and the apostles were witnesses. Nor did the resurrection rest upon this alone; Christ had poured upon his disciples the miraculous gifts and Divine influences, of which they witnessed the effects. Through the Saviour, the ways of life are made known; and we are encouraged to expect God's presence, and his favour for evermore. All this springs from assured belief that Jesus is the Lord, and the anointed Saviour.
Was this helpful?
SDA Bible Commentary (limited)
Volume 1-7

36. House of Israel. Peter intends his words to go beyond the immediate circle of his hearers to “all” Israel. Nevertheless, his vision thus far is evidently limited to the Jewish race, as was true of the other disciples. This is evident from Peter’s experience with Cornelius see chs. 10:9-16; 11:1-18.

Ye have crucified. The pronoun “ye” (humeis), not ordinarily given in the Greek, emphasizes the contrast between the Jews’ treatment of Jesus and the recognition He had received from the Father. In the Greek the word “crucified” comes at the end of the sentence, and makes a most solemn conclusion. Peter boldly lays the crime at the Jews’ door. He unflinchingly presses home their guilt and thus prepares the way for the effects described in v. 37.

Lord and Christ. The word “Lord” reflects the thought of the psalm cited in v. 34. “Christ” identifies Jesus as the Messiah (see on Ps. 2:2; Matt. 1:1). The original word order possesses a force which the English cannot give: “Both Lord and Christ hath God made this Jesus.”

Was this helpful?
Ellen G. White
The Acts of the Apostles, 41-2

In answer to the accusation of the priests Peter showed that this demonstration was in direct fulfillment of the prophecy of Joel, wherein he foretold that such power would come upon men to fit them for a special work. “Ye men of Judea, and all ye that dwell at Jerusalem,” he said, “be this known unto you, and hearken to my words: for these are not drunken, as ye suppose, seeing it is but the third hour of the day. But this is that which was spoken by the prophet Joel: And it shall come to pass in the last days, saith God, I will pour out of My Spirit upon all flesh: and your sons and your daughters shall prophesy, and your young men shall see visions, and your old men shall dream dreams: and on My servants and on My handmaidens I will pour out in those days of My Spirit; and they shall prophesy.” AA 41.1

With clearness and power Peter bore witness of the death and resurrection of Christ: “Ye men of Israel, hear these words: Jesus of Nazareth, a man approved of God among you by miracles and wonders and signs, which God did by Him in the midst of you, as ye yourselves also know: Him ... ye have taken, and by wicked hands have crucified and slain: whom God hath raised up, having loosed the pains of death: because it was not possible that He should be holden of it.” AA 41.2

Peter did not refer to the teachings of Christ to prove his position, because he knew that the prejudice of his hearers was so great that his words on this subject would be of no effect. Instead, he spoke to them of David, who was regarded by the Jews as one of the patriarchs of their nation. “David speaketh concerning Him,” he declared: “I foresaw the Lord always before My face, for He is on My right hand, that I should not be moved: therefore did My heart rejoice, and My tongue was glad; moreover also My flesh shall rest in hope: because Thou wilt not leave My soul in hell, neither wilt Thou suffer Thine Holy One to see corruption.... AA 41.3

Read in context »
Was this helpful?
Ellen G. White
The Acts of the Apostles, 221

Read in context »
Was this helpful?
Ellen G. White
The Desire of Ages, 194

The Saviour is still carrying forward the same work as when He proffered the water of life to the woman of Samaria. Those who call themselves His followers may despise and shun the outcast ones; but no circumstance of birth or nationality, no condition of life, can turn away His love from the children of men. To every soul, however sinful, Jesus says, If thou hadst asked of Me, I would have given thee living water. DA 194.1

The gospel invitation is not to be narrowed down, and presented only to a select few, who, we suppose, will do us honor if they accept it. The message is to be given to all. Wherever hearts are open to receive the truth, Christ is ready to instruct them. He reveals to them the Father, and the worship acceptable to Him who reads the heart. For such He uses no parables. To them, as to the woman at the well, He says, “I that speak unto thee am He.” DA 194.2

When Jesus sat down to rest at Jacob's well, He had come from Judea, where His ministry had produced little fruit. He had been rejected by the priests and rabbis, and even the people who professed to be His disciples had failed of perceiving His divine character. He was faint and weary; yet He did not neglect the opportunity of speaking to one woman, though she was a stranger, an alien from Israel, and living in open sin. DA 194.3

Read in context »
Was this helpful?
Ellen G. White
The Story of Redemption, 244-5

Peter showed them that this manifestation was the direct fulfillment of the prophecy of Joel, wherein he foretold that such power would come upon men of God to fit them for a special work. SR 244.1

Peter traced back the lineage of Christ in a direct line to the honorable house of David. He did not use any of the teachings of Jesus to prove His true position, because he knew their prejudices were so great that it would be of no effect. But he referred them to David, whom the Jews regarded as a venerable patriarch of their nation. Said Peter: SR 244.2 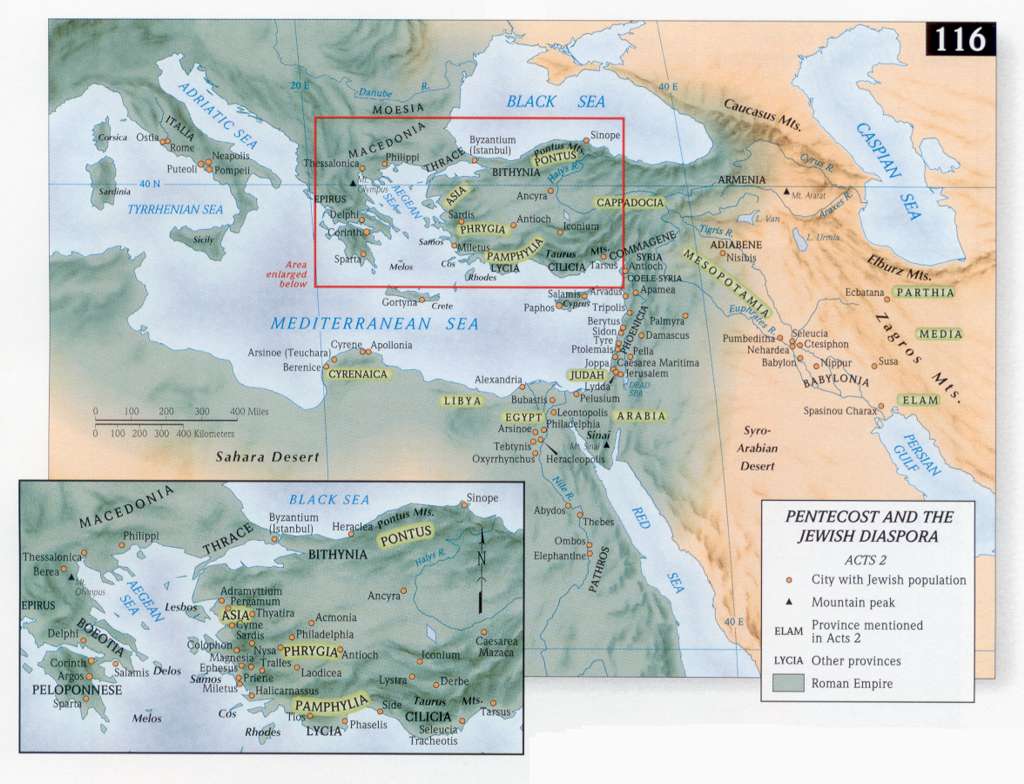