King James Version (KJV)
So all the elders of Israel came to the king to Hebron; and king David made a league with them in Hebron before the Lord: and they anointed David king over Israel.
Adam Clarke
Bible Commentary

They anointed David king - This was the third time that David was anointed, having now taken possession of the whole kingdom.

Before the Lord - Abiathar and Zadok the priests were both with David, and the tabernacle and altar may have been at Hebron, though the ark was at Kirjath-jearim.

Was this helpful?
Matthew Henry
Concise Bible Commentary
David was anointed king a third time. His advances were gradual, that his faith might be tried, and that he might gain experience. Thus his kingdom typified that of the Messiah, which was to come to its height by degrees. Thus Jesus became our Brother, took upon him our nature, dwelt in it that he might become our Prince and Saviour: thus the humbled sinner takes encouragement from the endearing relation, applies for his salvation, submits to his authority, and craves his protection.
Was this helpful?
SDA Bible Commentary (limited)
Volume 1-7

3. All the elders. The elders acted as the representatives and spokesmen of the people. With them came many of the warriors and the priests to acknowledge their allegiance to the son of Jesse (1 Chron. 12:23-38). Many thousands thronged to Hebron for the coronation ceremonies.

Made a league. The details of the agreement are not given, but there was evidently some understanding as to the prerogatives of the king and the rights of the subjects. There may have been reference to such matters as leadership in war, freedom from tribal partiality, political asylum for the remnant of the house of Saul, the size of the national army, and the manner of securing recruits, etc.

Over Israel. David had previously been anointed king over Judah (ch. 2:4).

Was this helpful?
Ellen G. White
Patriarchs and Prophets, 701-2

They appeared before David with the gory witness to their crime, saying, “Behold the head of Ishbosheth the son of Saul thine enemy, which sought thy life; and the Lord hath avenged my lord the king this day of Saul, and of his seed.” But David, whose throne God Himself had established, and whom God had delivered from his adversaries, did not desire the aid of treachery to establish his power. He told these murderers of the doom visited upon him who boasted of slaying Saul. “How much more,” he added, “when wicked men have slain a righteous person in his own house upon his bed? shall I not therefore now require his blood of your hand, and take you away from the earth? And David commanded his young men, and they slew them.... But they took the head of Ishbosheth and buried it in the sepulchre of Abner in Hebron.” PP 701.1

After the death of Ishbosheth there was a general desire among the leading men of Israel that David should become king of all the tribes. “Then came all the tribes of Israel to David unto Hebron, and spake, saying, Behold, we are thy bone and thy flesh.” They declared, “Thou wast he that leddest out and broughtest in Israel: and the Lord said to thee, Thou shalt feed My people Israel, and thou shalt be a captain over Israel. So all the elders of Israel came to the king to Hebron; and King David made a league with them in Hebron before the Lord.” Thus through the providence of God the way had been opened for him to come to the throne. He had no personal ambition to gratify, for he had not sought the honor to which he had been brought. PP 701.2

More than eight thousand of the descendants of Aaron and of the Levites waited upon David. The change in the sentiments of the people was marked and decisive. The revolution was quiet and dignified, befitting the great work they were doing. Nearly half a million souls, the former subjects of Saul, thronged Hebron and its environs. The very hills and valleys were alive with the multitudes. The hour for the coronation was appointed; the man who had been expelled from the court of Saul, who had fled to the mountains and hills and to the caves of the earth to preserve his life, was about to receive the highest honor that can be conferred upon man by his fellow man. Priests and elders, clothed in the garments of their sacred office, officers and soldiers with glittering spear and helmet, and strangers from long distances, stood to witness the coronation of the chosen king. David was arrayed in the royal robe. The sacred oil was put upon his brow by the high priest, for the anointing by Samuel had been prophetic of what would take place at the inauguration of the king. The time had come, and David, by solemn rite, was consecrated to his office as God's vicegerent. The scepter was placed in his hands. The covenant of his righteous sovereignty was written, and the people gave their pledges of loyalty. The diadem was placed upon his brow, and the coronation ceremony was over. Israel had a king by divine appointment. He who had waited patiently for the Lord, beheld the promise of God fulfilled. “And David went on, and grew great, and the Lord God of hosts was with him.” 2 Samuel 5:10. PP 701.3 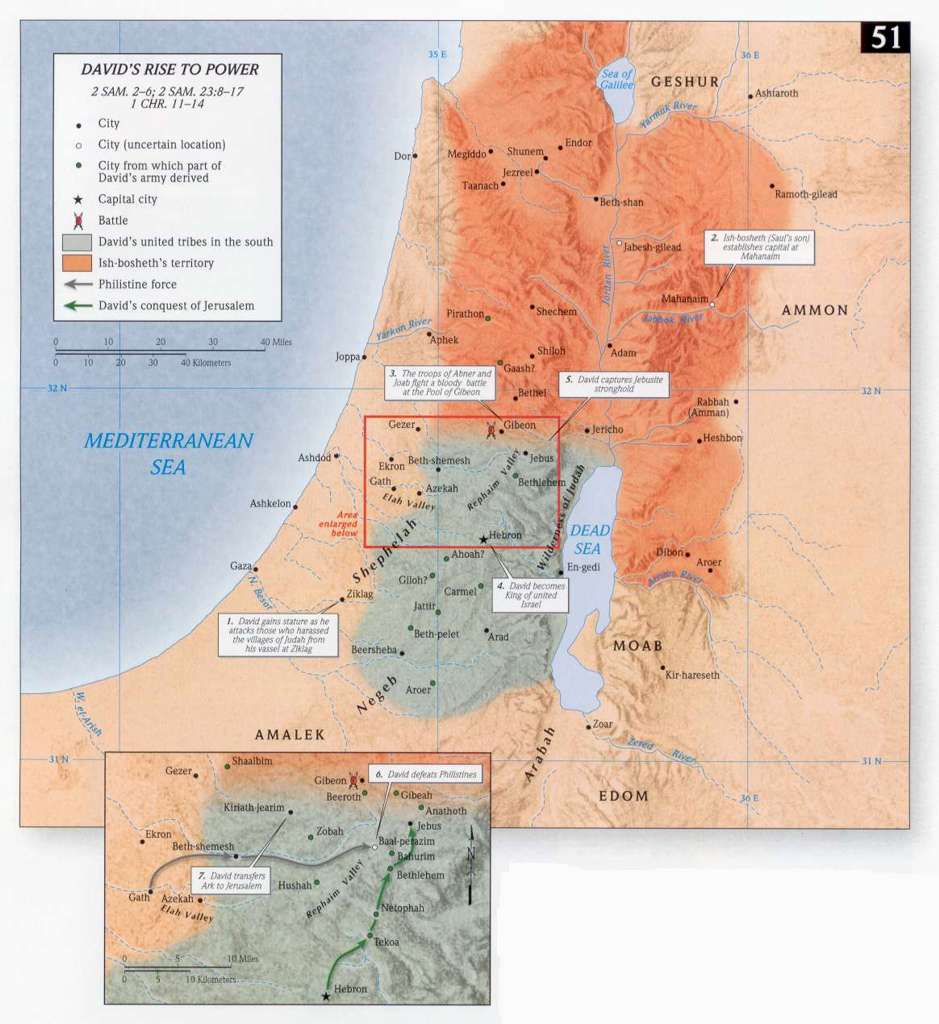