King James Version (KJV)
Now in the fourteenth year of king Hezekiah did Sennacherib king of Assyria come up against all the fenced cities of Judah, and took them.
Albert Barnes
Notes on the Whole Bible

In the fourteenth year - This note of time, which places the invasion of Sennacherib eight years only after the capture of Samaria, is hopelessly at variance with the Assyrian dates for the two events, the first of which falls into the first of Sargon, and the second into the fourth of Sennacherib, twenty-one years later. We have therefore to choose between an entire rejection of the Assyrian chronological data, and an emendation of the present passage. Of the emendations proposed the simplest is to remove the note of time altogether, regarding it as having crept in from the margin.

Sennacherib - This is the Greek form of the Sinakhirib of the inscriptions, the son of Sargon, and his immediate successor in the monarchy. The death of Sargon (705 B.C.) had been followed by a number of revolts. Hezekiah also rebelled, invaded Philistia, and helped the national party in that country to throw off the Assyrian yoke.

From Sennacherib‘s inscriptions we learn that, having reduced Phoenicia, recovered Ascalon, and defeated an army of Egyptians and Ethiopians at Ekron, he marched against Jerusalem.

The fenced cities - Sennacherib reckons the number taken by him at “forty-six.” He seems to have captured on his way to the holy city a vast number of small towns and villages, whose inhabitants he carried off to the number of 200,000. Compare Isaiah 24:1-12. The ground occupied by his main host outside the modern Damascus gate was thenceforth known to the Jews as “the camp of the Assyrians.” Details connected with the siege may be gathered from 2 Kings 18:14 had left his army to continue the siege, and gone in person to Lachish. The Jewish monarch sent his embassy to that town.

Was this helpful?
Matthew Henry
Concise Bible Commentary
The descent Sennacherib made upon Judah, was a great calamity to that kingdom, by which God would try the faith of Hezekiah, and chastise the people. The secret dislike, the hypocrisy, and lukewarmness of numbers, require correction; such trials purify the faith and hope of the upright, and bring them to simple dependence on God.
Was this helpful?
SDA Bible Commentary (limited)
Volume 1-7

13. The fourteenth year. This is the first of Sennacherib’s famous campaigns against Hezekiah. The narrative runs from chs. 18:13 to 19:37. The same account, in practically identical language, is found in the 36th and 37th chs. of Isaiah. This would suggest that Isaiah was the author of this portion of 2 Kings. A somewhat abbreviated history in 2 Chron. 32:1-22 gives details of Hezekiah’s war preparations.

Scholars disagree as to whether the narrative describes one or two campaigns. The majority of modern commentators have held that the account describes one campaign and that the events all belong in Hezekiah’s 14th year, 701 b.c. Others have held that the account blends the records of two Assyrian campaigns, the first in the 14th year of Hezekiah’s reign, in which the fenced cities of Judah were taken, and the second late in Hezekiah’s reign when a large section of the Assyrian army was destroyed (ch. 19:35). In favor of the former view is the fact that there seems to be no natural break in the Bible narrative. Furthermore Assyrian sources describe a campaign of Sennacherib generally dated in the year 701 b.c., but make no positive mention of a later campaign, against Judah, although the records may be incomplete, or it may be Sennacherib purposely omitted from his annals a record of his defeat. Concerning the campaign of 701 b.c., Sennacherib claims that he shut up “Hezekiah like a caged bird,” a description that equally fits a campaign over-running the fenced cities of Judah as well as one more definitely threatening Jerusalem.

Hezekiah’s extensive preparations for defense (see 2 Chron. 32:2-6) suggest some considerable interval between the two campaigns; also the fact that the Bible narrative seems to indicate that the death of Sennacherib took place shortly after his return from his unsuccessful attempt against Jerusalem. If there was only the one campaign in 701 b.c. his assassination would come some 20 years after his return to Assyria. Furthermore, inscriptions in which Tirhakah (ch. 19:9) gives his age as 20 years at the time when he became coregent with his brother in 690 b.c., indicate that he was born about the year 709 b.c. This would make it impossible for him to have taken part in the events described if they occurred in the year 701 b.c. It was formerly held that though he did not become king of Egypt till about 690 b.c., he might have been a general of the army. If Tirhakah’s statements concerning his age are correct the only way to synchronize the statement of ch. 19:9 with its context is to assume a second campaign toward the close of Hezekiah’s reign (see PK 339). Evidently the fenced cities were taken and tribute paid in the first campaign, and Jerusalem saved by divine interposition in the second.

It is inconsequential that opinions differ as to where the division comes in the narrative, which was written to show God’s overruling care for those who seek Him, not to furnish a chronological outline.

The fenced cities. Sennacherib claims the capture of 46 walled cities of Judah.

Was this helpful?
Ellen G. White
Prophets and Kings, 305

The judgment that befell Uzziah seemed to have a restraining influence on his son. Jotham bore heavy responsibilities during the later years of his father's reign and succeeded to the throne after Uzziah's death. Of Jotham it is written: “He did that which was right in the sight of the Lord: he did according to all that his father Uzziah had done. Howbeit the high places were not removed: the people sacrificed and burned incense still in the high places.” 2 Kings 15:34, 35. PK 305.1

The reign of Uzziah was drawing to a close, and Jotham was already bearing many of the burdens of state, when Isaiah, of the royal line, was called, while yet a young man, to the prophetic mission. The times in which Isaiah was to labor were fraught with peculiar peril to the people of God. The prophet was to witness the invasion of Judah by the combined armies of northern Israel and of Syria; he was to behold the Assyrian hosts encamped before the chief cities of the kingdom. During his lifetime, Samaria was to fall, and the ten tribes of Israel were to be scattered among the nations. Judah was again and again to be invaded by the Assyrian armies, and Jerusalem was to suffer a siege that would have resulted in her downfall had not God miraculously interposed. Already grave perils were threatening the peace of the southern kingdom. The divine protection was being removed, and the Assyrian forces were about to overspread the land of Judah. PK 305.2

But the dangers from without, overwhelming though they seemed, were not so serious as the dangers from within. It was the perversity of his people that brought to the Lord's servant the greatest perplexity and the deepest depression. By their apostasy and rebellion those who should have been standing as light bearers among the nations were inviting the judgments of God. Many of the evils which were hastening the swift destruction of the northern kingdom, and which had recently been denounced in unmistakable terms by Hosea and Amos, were fast corrupting the kingdom of Judah. PK 305.3

Read in context »
Was this helpful?
Ellen G. White
Prophets and Kings, 339

The reign of Hezekiah was characterized by a series of remarkable providences which revealed to the surrounding nations that the God of Israel was with His people. The success of the Assyrians in capturing Samaria and in scattering the shattered remnant of the ten tribes among the nations, during the earlier portion of his reign, was leading many to question the power of the God of the Hebrews. Emboldened by their successes, the Ninevites had long since set aside the message of Jonah and had become defiant in their opposition to the purposes of Heaven. A few years after the fall of Samaria the victorious armies reappeared in Palestine, this time directing their forces against the fenced cities of Judah, with some measure of success; but they withdrew for a season because of difficulties arising in other portions of their realm. Not until some years later, toward the close of Hezekiah's reign, was it to be demonstrated before the nations of the world whether the gods of the heathen were finally to prevail. PK 339.1

In the midst of his prosperous reign King Hezekiah was suddenly stricken with a fatal malady. “Sick unto death,” his case was beyond the power of man to help. And the last vestige of hope seemed removed when the prophet Isaiah appeared before him with the message, “Thus saith the Lord, Set thine house in order: for thou shalt die, and not live.” Isaiah 38:1. PK 340.1

Read in context »
Was this helpful?
Ellen G. White
Prophets and Kings, 350

In another prophetic message, given “in the year that King Ahaz died,” the prophet had declared: “The Lord of hosts hath sworn, saying, Surely as I have thought, so shall it come to pass; and as I have purposed, so shall it stand: that I will break the Assyrian in My land, and upon My mountains tread him underfoot: then shall his yoke depart from off them, and his burden depart from off their shoulders. This is the purpose that is purposed upon the whole earth: and this is the hand that is stretched out upon all the nations. For the Lord of hosts hath purposed, and who shall disannul it? and His hand is stretched out, and who shall turn it back?” Isaiah 14:28, 24-27. PK 350.1

The power of the oppressor was to be broken. Yet Hezekiah, in the earlier years of his reign, had continued to pay tribute to Assyria, in harmony with the agreement entered into by Ahaz. Meanwhile the king had taken “counsel with his princes and his mighty men,” and had done everything possible for the defense of his kingdom. He had made sure of a bountiful supply of water within the walls of Jerusalem, while without the city there should be a scarcity. “Also he strengthened himself, and built up all the wall that was broken, and raised it up to the towers, and another wall without, and repaired Millo in the city of David, and made darts and shields in abundance. And he set captains of war over the people.” 2 Chronicles 32:3, 5, 6. Nothing had been left undone that could be done in preparation for a siege. PK 350.2

At the time of Hezekiah's accession to the throne of Judah, the Assyrians had already carried captive a large number of the children of Israel from the northern kingdom; and a few years after he had begun to reign, and while he was still strengthening the defenses of Jerusalem, the Assyrians besieged and captured Samaria and scattered the ten tribes among the many provinces of the Assyrian realm. The borders of Judah were only a few miles distant, with Jerusalem less than fifty miles away; and the rich spoils to be found within the temple would tempt the enemy to return. PK 351.1 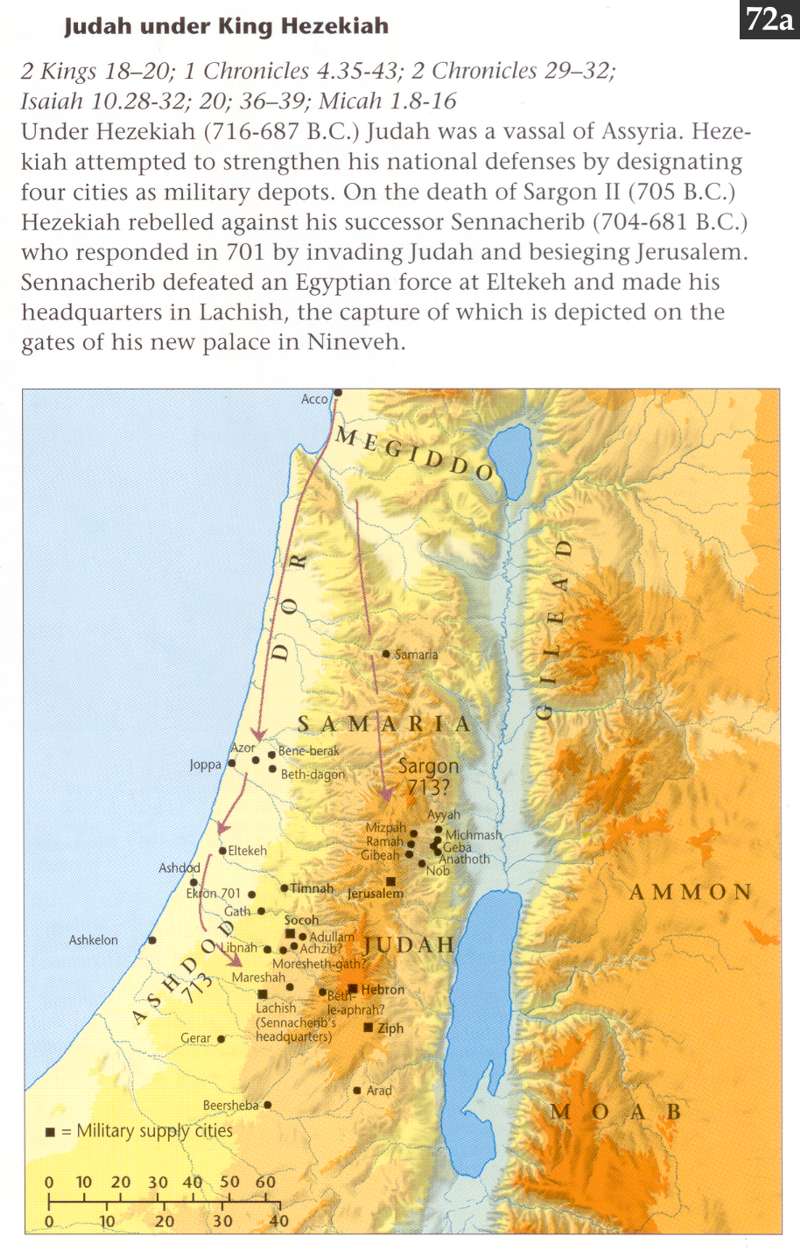 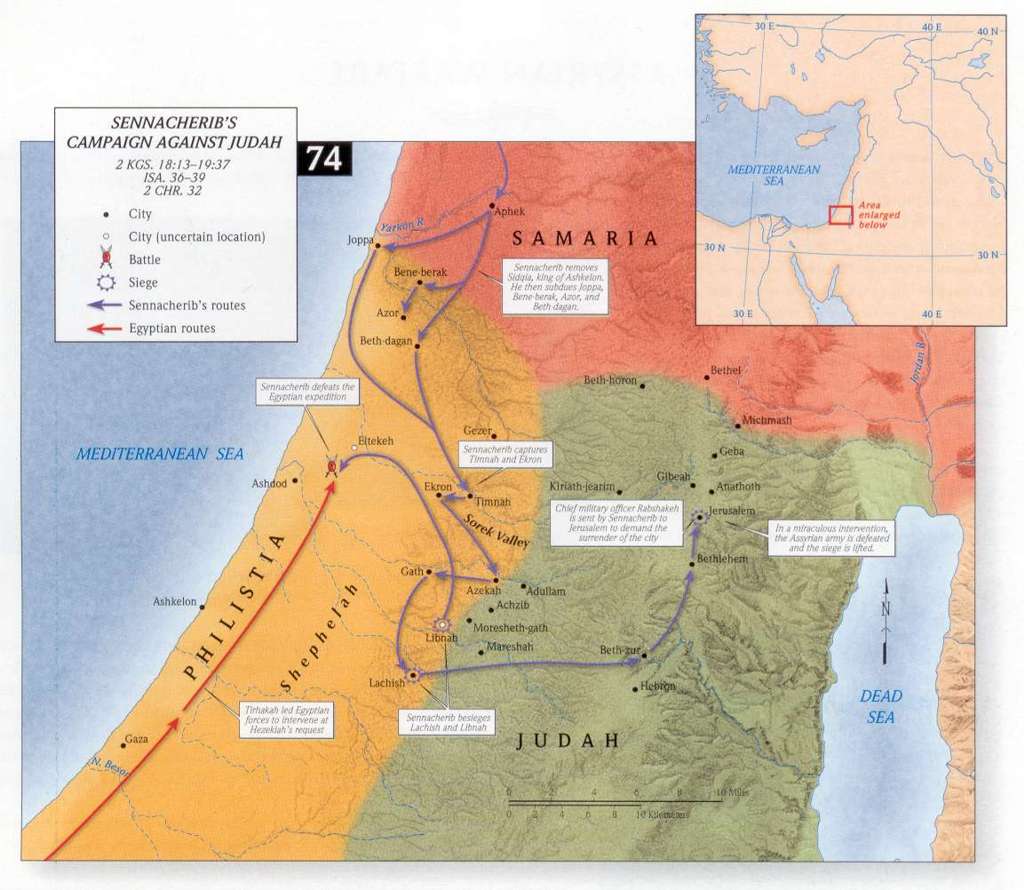