King James Version (KJV)
And Joshua the son of Nun, and Caleb the son of Jephunneh, which were of them that searched the land, rent their clothes:
Adam Clarke
Bible Commentary

Was this helpful?
Matthew Henry
Concise Bible Commentary
Moses and Aaron were astonished to see a people throw away their own mercies. Caleb and Joshua assured the people of the goodness of the land. They made nothing of the difficulties in the way of their gaining it. If men were convinced of the desirableness of the gains of religion, they would not stick at the services of it. Though the Canaanites dwell in walled cities, their defence was departed from them. The other spies took notice of their strength, but these of their wickedness. No people can be safe, when they have provoked God to leave them. Though Israel dwell in tents, they are fortified. While we have the presence of God with us, we need not fear the most powerful force against us. Sinners are ruined by their own rebellion. But those who, like Caleb and Joshua, faithfully expose themselves for God, are sure to be taken under his special protection, and shall be hid from the rage of men, either under heaven or in heaven.
Was this helpful?
SDA Bible Commentary (limited)
Volume 1-7

Was this helpful?
Ellen G. White
Patriarchs and Prophets, 407

The wilderness wandering was not only ordained as a judgment upon the rebels and murmurers, but it was to serve as a discipline for the rising generation, preparatory to their entrance into the Promised Land. Moses declared to them, “As a man chasteneth his son, so the Lord thy God chasteneth thee,” “to humble thee, and to prove thee, to know what was in thine heart, whether thou wouldest keep His commandments, or no. And He ... suffered thee to hunger, and fed thee with manna, which thou knewest not, neither did thy fathers know; that He might make thee know that man doth not live by bread only, but by every word that proceedeth out of the mouth of the Lord doth man live.” Deuteronomy 8:5, 2, 3. PP 407.1

“He found him in a desert land, and in the waste howling wilderness; He led him about, He instructed him, He kept him as the apple of His eye.” “In all their affliction He was afflicted, and the Angel of His presence saved them; in His love and in His pity He redeemed them; and He bare them, and carried them all the days of old.” Deuteronomy 32:10; Isaiah 63:9. PP 407.2

Yet the only records of their wilderness life are instances of rebellion against the Lord. The revolt of Korah had resulted in the destruction of fourteen thousand of Israel. And there were isolated cases that showed the same spirit of contempt for the divine authority. PP 407.3

On one occasion the son of an Israelitish woman and of an Egyptian, one of the mixed multitude that had come up with Israel from Egypt, left his own part of the camp, and entering that of the Israelites, claimed the right to pitch his tent there. This the divine law forbade him to do, the descendants of an Egyptian being excluded from the congregation until the third generation. A dispute arose between him and an Israelite, and the matter being referred to the judges was decided against the offender. PP 407.4

Enraged at this decision, he cursed the judge, and in the heat of passion blasphemed the name of God. He was immediately brought before Moses. The command had been given, “He that curseth his father, or his mother, shall surely be put to death” (Exodus 21:17); but no provision had been made to meet this case. So terrible was the crime that there was felt to be a necessity for special direction from God. The man was placed in ward until the will of the Lord could be ascertained. God Himself pronounced the sentence; by the divine direction the blasphemer was conducted outside the camp and stoned to death. Those who had been witness to the sin placed their hands upon his head, thus solemnly testifying to the truth of the charge against him. Then they threw the first stones, and the people who stood by afterward joined in executing the sentence. PP 407.5

“And all the congregation lifted up their voice, and cried; and the people wept that night.” The men who have so long borne with the perversity of Israel know too well what the next scene will be. Revolt and open mutiny quickly follow; for Satan has had full sway, and the people seem bereft of reason. They curse Moses and Aaron, forgetting that God hears their wicked speeches, and that, enshrouded in the cloudy pillar, the Angel of His presence is witnessing their terrible outburst of wrath. In bitterness they cry out: “Would God that we had died in the land of Egypt! or would God we had died in this wilderness! And wherefore hath the Lord brought us unto this land, to fall by the sword, that our wives and our children should be a prey? Were it not better for us to return into Egypt? And they said one to another, Let us make a captain, and let us return into Egypt.” 5T 377.1

In humiliation and distress, Moses and Aaron fall on “their faces before all the assembly of the congregation of the children of Israel,” not knowing what to do to turn them from their rash and passionate purpose. Caleb and Joshua attempt to quiet the tumult. With their garments rent in token of grief and indignation, they rush in among the people, and their ringing voices are heard above the tempest of lamentation and rebellious grief: “The land, which we passed through to search it, is an exceeding good land. If the Lord delight in us, then He will bring us into this land, and give it us; a land which floweth with milk and honey. Only rebel not ye against the Lord, neither fear ye the people of the land; for they are bread for us: their defense is departed from them, and the Lord is with us: fear them not.” 5T 377.2

As the people listened to this report they gave vent to their disappointment with bitter reproaches and wailing. They did not wait, and reflect, and reason, that God, who had brought them out thus far, would certainly give them the land. But they yielded to discouragement at once. They limited the power of the Holy One, and trusted not in God, who had hitherto led them. They reproached Moses, and murmuringly said to one another, This, then, is the end of all our hopes. This is the land that we have been traveling from Egypt to obtain. Caleb and Joshua sought to obtain a hearing. But the people were so excited they could not command themselves to listen to these two men. After they were calmed a little, Caleb ventured to speak. He said to the people, “Let us go up at once, and possess it, for we are well able to overcome it.” But the men that went up with him said, “We be not able to go up against the people, for they are stronger than we.” And they continued to repeat their evil report, and declared that all the men were of great stature. “And there we saw the giants, the sons of Anak, which come of the giants. And we were in our own sight as grasshoppers, and so we were in their sight. And all the congregation lifted up their voice, and cried, and the people wept that night. And all the children of Israel murmured against Moses and against Aaron. And the whole congregation said unto them, Would God that we had died in the land of Egypt! or would God that we had died in this wilderness! And wherefore hath the Lord brought us unto this land, to fall by the sword, that our wives and our children should be a prey? Were it not better for us to return into Egypt? And they said one to another, Let us make a captain, and let us return into Egypt. Then Moses and Aaron fell on their faces before all the assembly of the congregation of the children of Israel.” 4aSG 22.1

Read in context »
Was this helpful?
Ellen G. White
The Story of Redemption, 158-63

The Lord commanded Moses to send men to search the land of Canaan, which He would give unto the children of Israel. A ruler of each tribe was to be selected for this purpose. They went and, after forty days, returned from their search, and came before Moses and Aaron and all the congregation of Israel, and showed them the fruit of the land. All agreed that it was a good land, and they exhibited the rich fruit which they had brought as evidence. One cluster of grapes was so large that two men carried it between them on a staff. They also brought of the figs and the pomegranates, which grew there in abundance. SR 158.1

After they had spoken of the fertility of the land, all but two spoke very discouragingly of their being able to possess it. They said that the people were very strong that dwelt in the land, and the cities were surrounded with great and high walls; and, more than all this, they saw the children of the giant Anak there. They then described how the people were situated around Canaan, and the impossibility of their ever being able to possess it. SR 158.2

As the people listened to this report they gave vent to their disappointment with bitter reproaches and wailing. They did not wait and reflect and reason that God, who had brought them out thus far, would certainly give them the land. But they yielded to discouragement at once. They limited the power of the Holy One and trusted not in God, who had hitherto led them. They reproached Moses and murmuringly said to one another, This, then, is the end of all our hopes. This is the land that we have been traveling from Egypt to obtain. SR 158.3

Read in context »
Was this helpful?
Ellen G. White
Testimonies for the Church, vol. 3, 355

The Hebrews had an opportunity to reflect upon the scene that they had witnessed in the visitation of God's wrath upon the most prominent ones in this great rebellion. The goodness and mercy of God were displayed in not completely exterminating this ungrateful people when His wrath was kindled against the most responsible ones. He gave the congregation who had permitted themselves to be deceived, space for repentance. The fact that the Lord, their invisible Leader, showed so much long-suffering and mercy in this instance is distinctly recorded as evidence of His willingness to forgive the most grievous offenders when they have a sense of their sin and return unto Him with repentance and humiliation. The congregation had been arrested in their presumptuous course by the display of the Lord's vengeance; but they were not convinced that they were great sinners against Him, deserving His wrath for their rebellious course. 3T 355.1

It is hardly possible for men to offer a greater insult to God than to despise and reject the instrumentalities that He has appointed to lead them. They had not only done this, but had purposed to put both Moses and Aaron to death. These men fled from the tents of Korah, Dathan, and Abiram through fear of destruction; but their rebellion was not cured. They were not in grief and despair because of their guilt. They felt not the effect of an awakened, convicted conscience because they had abused their most precious privileges and sinned against light and knowledge. We may here learn precious lessons of the long-suffering of Jesus, the Angel who went before the Hebrews in the wilderness. 3T 355.2

Events during the Sojourn at Kadesh-Barnea 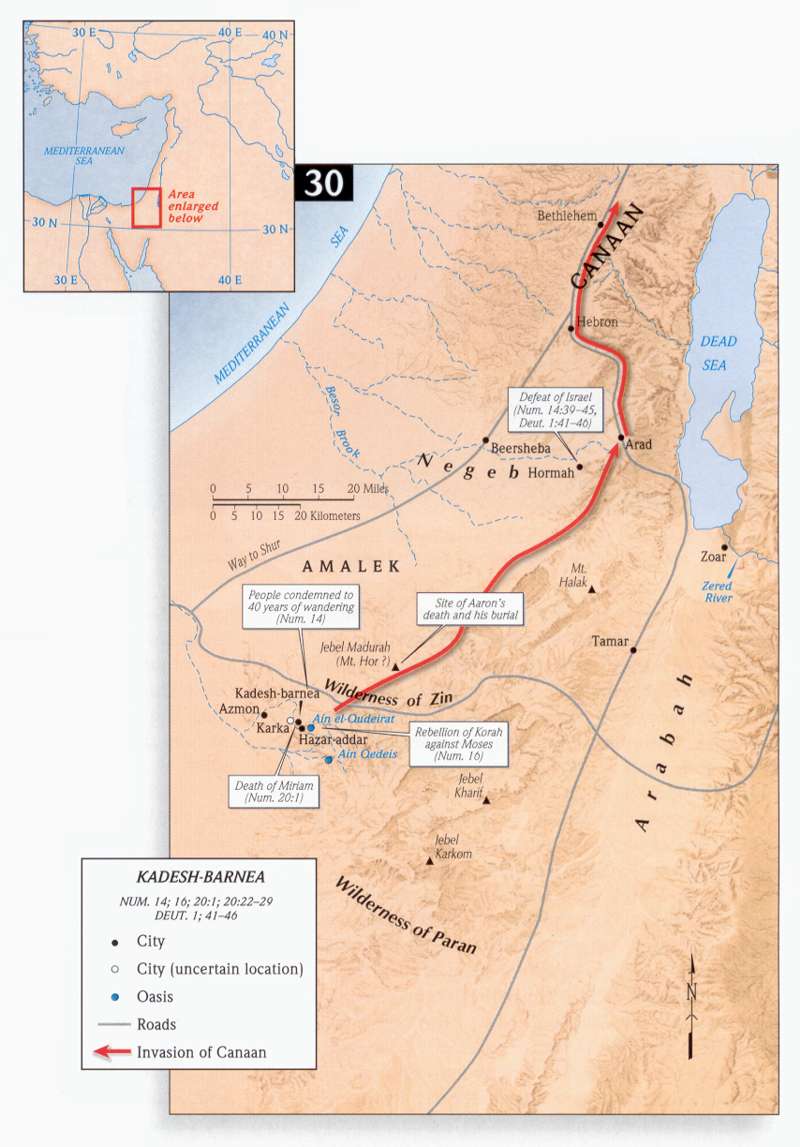