King James Version (KJV)
And he sought God in the days of Zechariah, who had understanding in the visions of God: and as long as he sought the Lord, God made him to prosper.
Adam Clarke
Bible Commentary

In the days of Zechariah - Who this was we know not, but by the character that is given of him here. He was wise in the visions of God - in giving the true interpretation of Divine prophecies. He was probably the tutor of Uzziah.

Who had understanding in the visions of God - Another reading, supported by the Septuagint, and some ancient versions, is: “who instructed him in the fear of God.”

Was this helpful?
Matthew Henry
Concise Bible Commentary
As long as Uzziah sought the Lord, and minded religion, God made him to prosper. Those only prosper whom God makes to prosper; for prosperity is his gift. Many have owned, that as long as they sought the Lord, and kept close to their duty, they prospered; but when they forsook God, every thing went cross. God never continues either to bless the indolent or to withhold his blessing from the diligent. He will never suffer any to seek his face in vain. Uzziah's name was famed throughout all the neighbouring countries. A name with God and good people makes truly honourable. He did not delight in war, nor addict himself to sports, but delighted in husbandry.
Was this helpful?
SDA Bible Commentary (limited)
Volume 1-7

5. Zechariah. This is the only mention of this prophet.

Sought the Lord. Such statements, which constantly point out the blessings of obedience and the bitter fruitage of transgression, are characteristic of Chronicles.

Was this helpful?
Ellen G. White
Prophets and Kings, 303-4

The long reign of Uzziah [also known as Azariah] in the land of Judah and Benjamin was characterized by a prosperity greater than that of any other ruler since the death of Solomon, nearly two centuries before. For many years the king ruled with discretion. Under the blessing of Heaven his armies regained some of the territory that had been lost in former years. Cities were rebuilt and fortified, and the position of the nation among the surrounding peoples was greatly strengthened. Commerce revived, and the riches of the nations flowed into Jerusalem. Uzziah's name “spread far abroad; for he was marvellously helped, till he was strong.” 2 Chronicles 26:15. PK 303.1

This outward prosperity, however, was not accompanied by a corresponding revival of spiritual power. The temple services were continued as in former years, and multitudes assembled to worship the living God; but pride and formality gradually took the place of humility and sincerity. Of Uzziah himself it is written: “When he was strong, his heart was lifted up to his destruction: for he transgressed against the Lord his God.” Verse 16. PK 303.2

Israel & Judah in the days of Jeroboam II and Uzziah 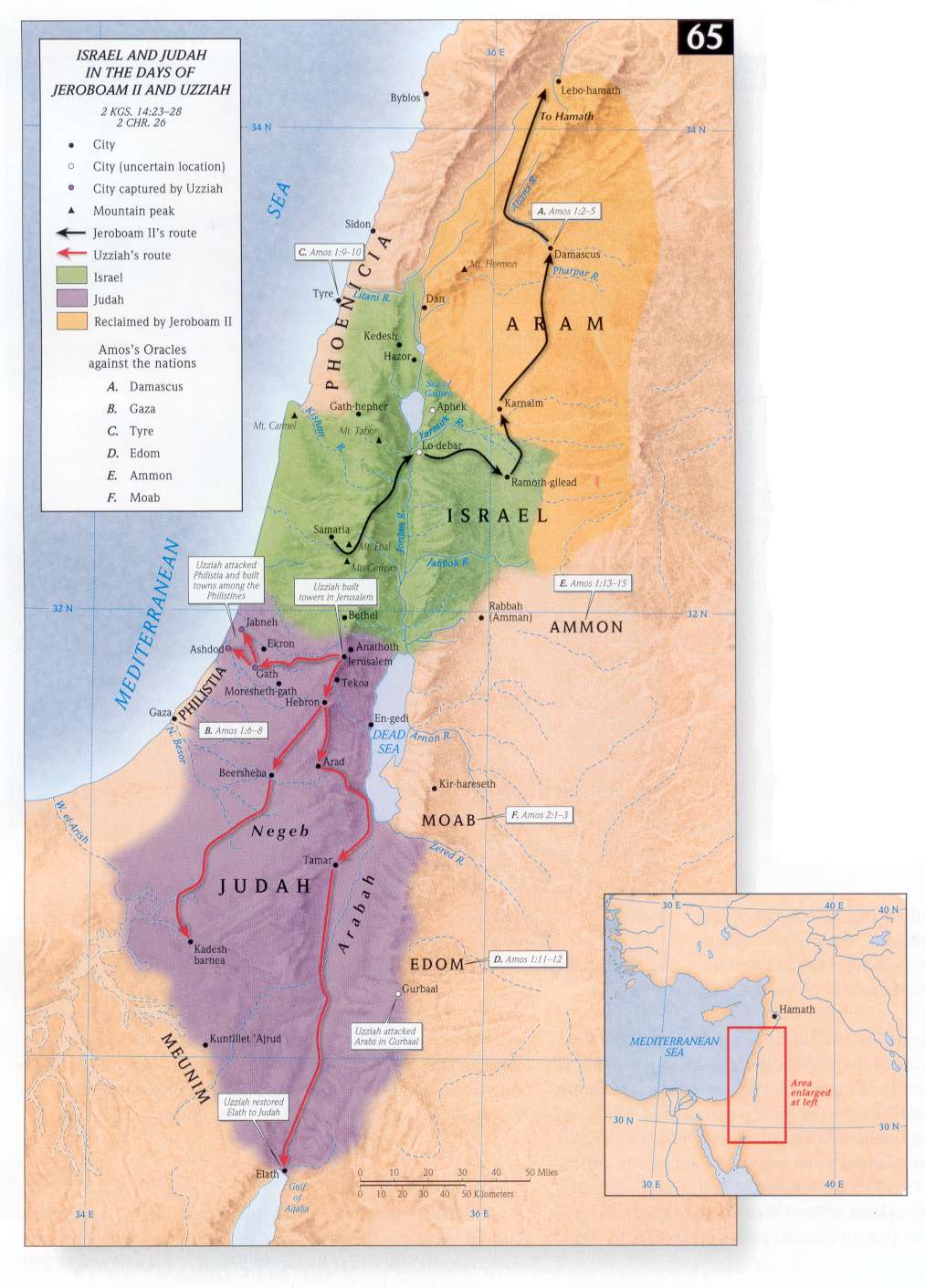