King James Version (KJV)
But the hand of the Lord was heavy upon them of Ashdod, and he destroyed them, and smote them with emerods, even Ashdod and the coasts thereof.
Adam Clarke
Bible Commentary

Smote them with emerods - The word עפלים apholim, from עפל aphal, to be elevated, probably means the disease called the bleeding piles, which appears to have been accompanied with dysentery, bloody flux, and ulcerated anus.

The Vulgate says, Et percussit in secretiori parte natium; "And he smote them in the more secret parts of their posteriors." To this the psalmist is supposed to refer, Psalm 78:66, He smote all his enemies in the Hinder Parts; he put them to a perpetual reproach. Some copies of the Septuagint have εξεζεσεν αυτοις εις τας ναυς, "he inflamed them in their ships:" other copies have εις τας ἑδρας, "in their posteriors." The Syriac is the same. The Arabic enlarges: "He smote them in their posteriors, so that they were affected with a dysenteria." I suppose them to have been affected with enlargements of the haemorrhoidal veins, from which there came frequent discharges of blood.

The Septuagint and Vulgate make a very material addition to this verse: Και μεσον της χωρας αυτης ανεφυεσιν μυες· και εγενετο συγχυσις θανατου μεγαλη εν τη πολει ; Et ebullierunt villae et agri in medio regionis illius; et nati sunt mures, et facta est confusio mortis magnae in civitate: "And the cities and fields of all that region burst up, and mice were produced, and there was the confusion of a great death in the city." This addition Houbigant contends was originally in the Hebrew text; and this gives us the reason why golden mice were sent, as well as the images of the emerods, ( 1 Samuel 6:4;), when the ark was restored.

Emerods - A corruption of “hemorrhoids.” It is mentioned Deuteronomy 28:27 among the diseases with which God threatened to punish the Israelites for disobedience.

Was this helpful?
Matthew Henry
Concise Bible Commentary
The hand of the Lord was heavy upon the Philistines; he not only convinced them of their folly, but severely chastised their insolence. Yet they would not renounce Dagon; and instead of seeking God's mercy, they desired to get clear of his ark. Carnal hearts, when they smart under the judgments of God, would rather, if it were possible, put him far from them, than enter into covenant or communion with him, and seek him for their friend. But their devices to escape the Divine judgments only increase them. Those that fight against God will soon have enough of it.
Was this helpful?
SDA Bible Commentary (limited)
Volume 1-7

6. Emerods. The characteristic symptom of this plague was a painful, tumorlike swelling.

Was this helpful?
Ellen G. White
Patriarchs and Prophets, 586-8

The Philistines removed the ark in triumph to Ashdod, one of their five principal cities, and placed it in the house of their god Dagon. They imagined that the power which had hitherto attended the ark would be theirs, and that this, united with the power of Dagon, would render them invincible. But upon entering the temple on the following day, they beheld a sight which filled them with consternation. Dagon had fallen upon his face to the earth before the ark of Jehovah. The priests reverently lifted the idol and restored it to its place. But the next morning they found it, strangely mutilated, again lying upon the earth before the ark. The upper part of this idol was like that of a man, and the lower part was in the likeness of a fish. Now every part that resembled the human form had been cut off, and only the body of the fish remained. Priests and people were horror-struck; they looked upon this mysterious event as an evil omen, foreboding destruction to themselves and their idols before the God of the Hebrews. They now removed the ark from their temple and placed it in a building by itself. PP 586.1

The inhabitants of Ashdod were smitten with a distressing and fatal disease. Remembering the plagues that were inflicted upon Egypt by the God of Israel, the people attributed their afflictions to the presence of the ark among them. It was decided to convey it to Gath. But the plague followed close upon its removal, and the men of that city sent it to Ekron. Here the people received it with terror, crying, “They have brought about the ark of the God of Israel to us, to slay us and our people.” They turned to their gods for protection, as the people of Gath and Ashdod had done; but the work of the destroyer went on, until, in their distress, “the cry of the city went up to heaven.” Fearing longer to retain the ark among the homes of men, the people next placed it in the open field. There followed a plague of mice, which infested the land, destroying the products of the soil, both in the storehouse and in the field. Utter destruction, by disease or famine, now threatened the nation. PP 586.2

For seven months the ark remained in Philistia, and during all this time the Israelites made no effort for its recovery. But the Philistines were now as anxious to free themselves from its presence as they had been to obtain it. Instead of being a source of strength to them, it was a great burden and a heavy curse. Yet they knew not what course to pursue; for wherever it went the judgments of God followed. The people called for the princes of the nation, with the priests and diviners, and eagerly inquired, “What shall we do to the ark of Jehovah? tell us wherewith we shall send it to his place?” They were advised to return it with a costly trespass offering. “Then,” said the priests, “ye shall be healed, and it shall be known to you why His hand is not removed from you.” PP 586.3

The Philistines thought this ark was the Israelites’ god. They knew not that the living God, who created the heavens and the earth, and gave his law upon Sinai, sent prosperity and adversity according to the obedience or transgression of his law, contained in the sacred chest. 4aSG 106.1

There was a very great slaughter in Israel. Eli was sitting by the wayside, watching with a trembling heart to receive news from the army. He was afraid that the ark of God might be taken, and polluted by the Philistine host. A messenger from the army ran to Shiloh and informed Eli that his two sons had been slain. He could bear this with a degree of calmness, for he had reason to expect it. But when the messenger added, “And the ark of God is taken,” Eli wavered in anguish upon his seat, and fell backward and died. He shared the wrath of God which came upon his sons. He was guilty in a great measure of their transgressions, because he had criminally neglected to restrain them. The capture of the ark of God by the Philistines was considered the greatest calamity which could befall Israel. The wife of Phinehas, as she was about to die, named her child Ichabod, saying, “The glory is departed from Israel, for the ark of God is taken.” 4aSG 106.2

God permitted his ark to be taken by their enemies to show Israel how vain it was to trust in the ark, the symbol of his presence, while they were profaning the commandments contained in the ark. God would humble them by removing from them that sacred ark, their boasted strength and confidence. 4aSG 106.3

Read in context »
Was this helpful?
Ellen G. White
The Story of Redemption, 188-9

The Philistines were triumphant, because they had, as they thought, the famous God of the Israelites, which had performed such wonders for them and had made them a terror to their enemies. They took the ark of God to Ashdod and set it in a splendid temple, made in honor to their most popular god Dagon, and placed it by the side of their god. In the morning the priests of these gods entered the temple, and they were terrified to find Dagon fallen upon his face to the ground before the ark of the Lord. They raised Dagon and placed him in his former position. They thought he might have fallen accidentally. But the next morning they found him fallen as before, upon his face to the ground, and the head of Dagon and both his hands were cut off. SR 188.1

The angels of God, who ever accompanied the ark, prostrated the senseless idol god and afterward mutilated it, to show that God, the living God, was above all gods, and that before Him every heathen god was as nothing. The heathen possessed great reverence for their god, Dagon; and when they found it ruinously mutilated and lying upon its face before the ark of God, they were sad and considered it a very bad omen to the Philistines. It was interpreted by them that the Philistines and all their gods would yet be subdued and destroyed by the Hebrews, and the Hebrews’ God would be greater and more powerful than all gods. They removed the ark of God from their idol temple and placed it by itself. SR 188.2

The ark of God was kept seven months by the Philistines. They had overcome the Israelites and had taken the ark of God, wherein they supposed their power consisted, and thought that they should ever be in safety and have no more fear of the armies of Israel. But in the midst of their joy at their success a wailing was heard all over the land, and the cause was at length credited to the ark of God. It was borne from place to place in terror, and destruction from God followed its course, until the Philistines were greatly perplexed to know what to do with it. Angels, who accompanied it, guarded it from all harm. And the Philistines did not dare to open the chest; for their God Dagon had met with such a fate that they feared to touch it, or to have it near them. They called for the priests and the diviners, and inquired of them what they should do with the ark of God. They advised them to send it back to the people to whom it belonged, and to send with it a costly trespass offering, which if God would be pleased to accept, they would be healed. They should also understand that God's hand was upon them because they had taken His ark, which belonged alone to Israel. SR 188.3

The Battle at Ebenezer and the Loss of the Ark 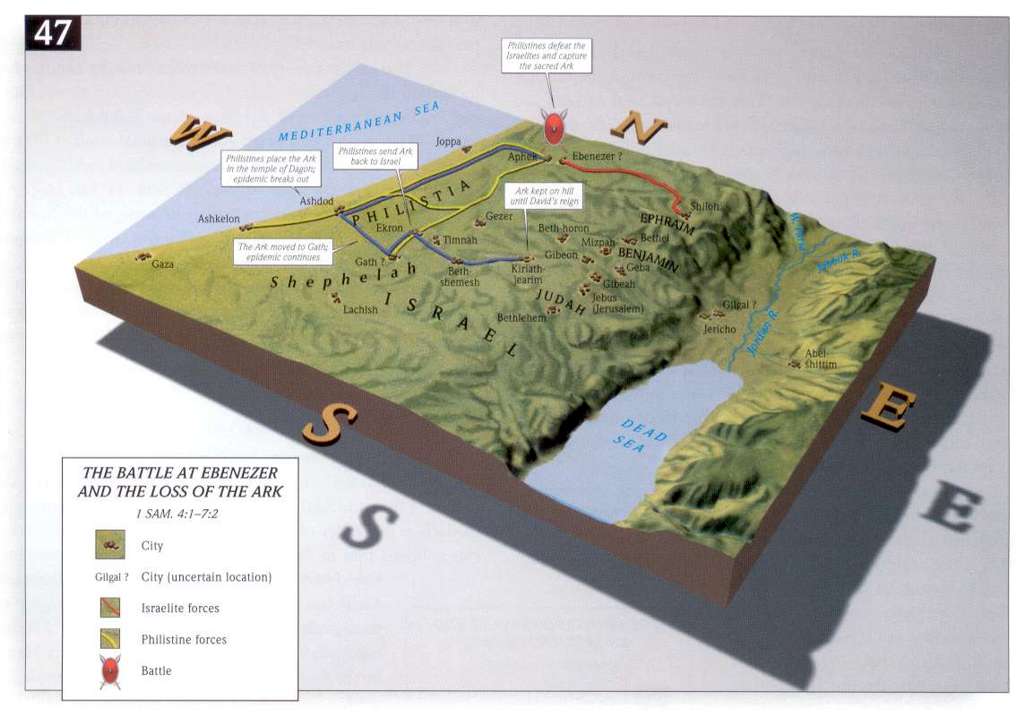