King James Version (KJV)
Then came the messengers to Gibeah of Saul, and told the tidings in the ears of the people: and all the people lifted up their voices, and wept.
Adam Clarke
Bible Commentary

Then came the messengers to Gibeah - It does not appear that the people of Jabesh-gilead knew any thing of Saul's appointment to the kingdom, for the message is not directed to him but to the people.

The people lifted up their voices and wept - They saw no hope of deliverance, and they expected that their reproach would be laid on all Israel.

They came to Gibeah on account of the connection between the Benjamites and the people of Jabesh 1 Samuel 11:5 shows how completely he was still in a private and humble station.

Was this helpful?
Matthew Henry
Concise Bible Commentary
The first fruit of Saul's government was the rescue of Jabesh-gilead from the Ammonites. To save their lives, men will part with liberty, and even consent to have their eyes put out; is it then no wisdom to part with that sin which is as dear to us as our right eye, rather than to be cast into hell-fire? See the faith and confidence of Saul, and, grounded thereon, his courage and resolution. See also his activity in this business. When the Spirit of the Lord comes upon men, it will make them expert, even without experience. When zeal for the glory of God, and love for the brethren, urge men to earnest efforts, and when God is pleased to help, great effects may speedily be produced.
Was this helpful?
Ellen G. White
Patriarchs and Prophets, 682

Thus the first king of Israel perished, with the guilt of self-murder upon his soul. His life had been a failure, and he went down in dishonor and despair, because he had set up his own perverse will against the will of God. PP 682.1

The tidings of defeat spread far and wide, carrying terror to all Israel. The people fled from the cities, and the Philistines took undisturbed possession. Saul's reign, independent of God, had well-nigh proved the ruin of his people. PP 682.2

On the day following the engagement, the Philistines, searching the battlefield to rob the slain, discovered the bodies of Saul and his three sons. To complete their triumph, they cut off the head of Saul and stripped him of his armor; then the head and the armor, reeking with blood, were sent to the country of the Philistines as a trophy of victory, “to publish it in the house of their idols, and among the people.” The armor was finally put in “the house of Ashtaroth,” while the head was fastened in the temple of Dagon. Thus the glory of the victory was ascribed to the power of these false gods, and the name of Jehovah was dishonored. PP 682.3

Read in context »
Was this helpful?
Ellen G. White
Patriarchs and Prophets, 612-3

In this condition of affairs Saul did not see fit to assume the royal dignity. Leaving Samuel to administer the government as formerly, he returned to Gibeah. He was honorably escorted thither by a company, who, seeing the divine choice in his selection, were determined to sustain him. But he made no attempt to maintain by force his right to the throne. In his home among the uplands of Benjamin he quietly occupied himself in the duties of a husbandman, leaving the establishment of his authority entirely to God. PP 612.1

Soon after Saul's appointment the Ammonites, under their king, Nahash, invaded the territory of the tribes east of Jordan and threatened the city of Jabesh-gilead. The inhabitants tried to secure terms of peace by offering to become tributary to the Ammonites. To this the cruel king would not consent but on condition that he might put out the right eye of every one of them, thus making them abiding witnesses to his power. PP 612.2

The people of the besieged city begged a respite of seven days. To this the Ammonites consented, thinking thus to heighten the honor of their expected triumph. Messengers were at once dispatched from Jabesh, to seek help from the tribes west of Jordan. They carried the tidings to Gibeah, creating widespread terror. Saul, returning at night from following the oxen in the field, heard the loud wail that told of some great calamity. He said, “What aileth the people that they weep?” When the shameful story was repeated, all his dormant powers were roused. “The Spirit of God came upon Saul.... And he took a yoke of oxen, and hewed them in pieces, and sent them throughout all the coasts of Israel by the hands of messengers, saying, Whosoever cometh not forth after Saul and after Samuel, so shall it be done unto his oxen.” PP 612.3

The Kingdom of Saul and His Wars 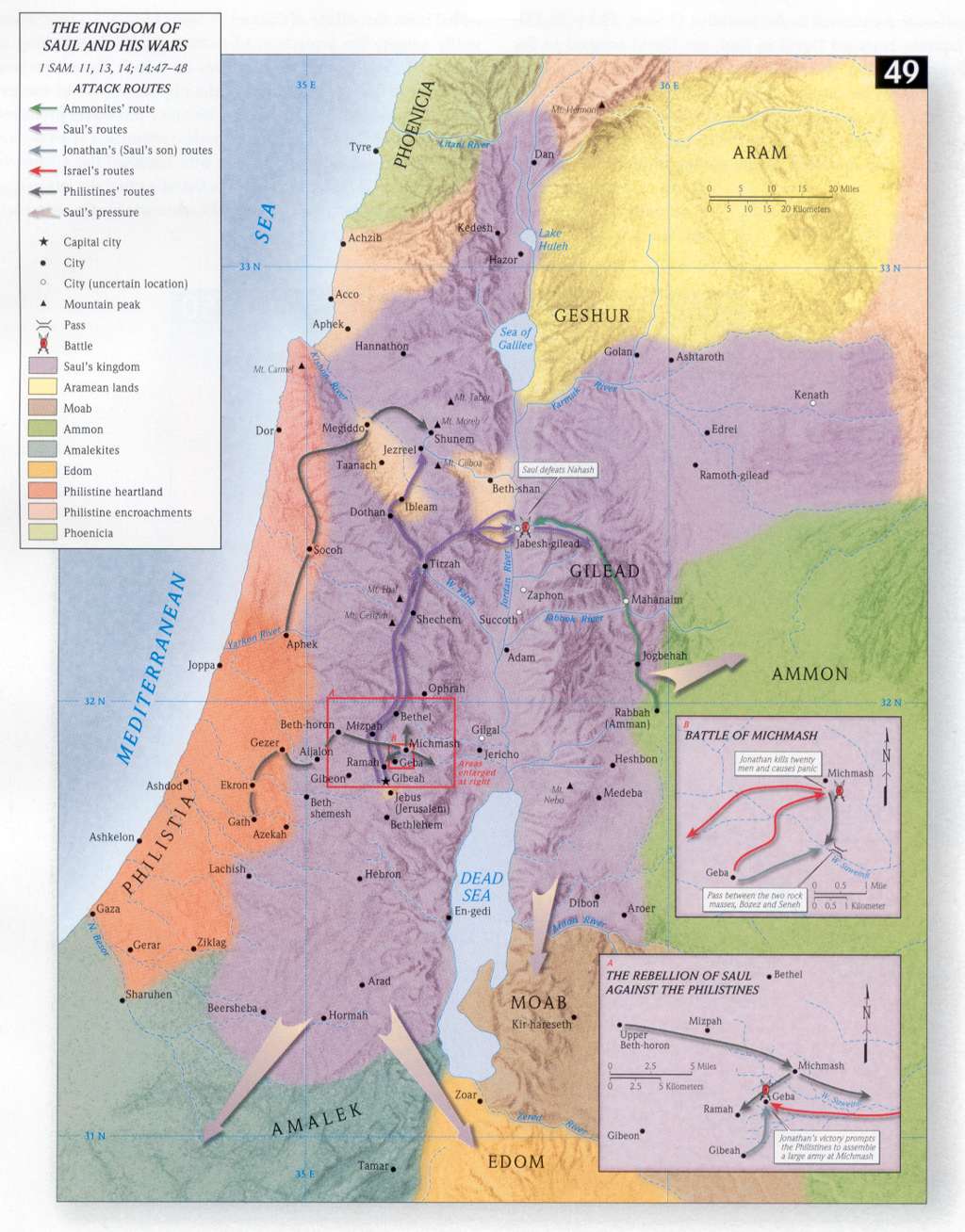